worldfirst.com uses cookies to help provide you with the best possible online experience. They are stored locally on your computer or mobile device. Please see our Privacy Policy for more details. To accept cookies continue browsing as normal.

Since the Coronavirus outbreak, WorldFirst has closely monitored the global situation. Our priority is to ensure continuity of service for our customers while taking appropriate measures to protect our employees.

Given the increase in UK cases, we have now encouraged employees to work remotely. They are able to operate normally using well-tested systems, and our teams are committed to ensure customer service is not impacted, but if there’s any delay in your calls or emails being answered please bear with us.

What is foreign exchange?

The United Nations recognises around 180 different currencies that can be used to buy and sell goods and services around the world. Exchanging one currency for another so as to buy, sell or settle debts in a foreign country is perhaps the simplest definition of foreign exchange.

For most of us, our first experience of foreign exchange is in the form of a bureau de change ahead of an overseas holiday. For others it might be understanding how many euros or dollars they’ll get when selling their product or services abroad.

Flags, acronyms, percentages, symbols and numbers are the main language of foreign exchange and help you understand just what it is and how it works.

An example of the Interbank rate: 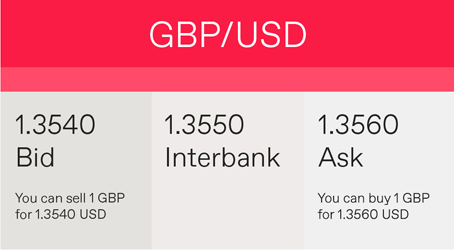 While the London Stock Exchange may be the hub for stocks and shares in the UK and the Chicago Mercantile Exchange is the base for commodities traders in the US, the currency markets have no official ‘home’. That’s because they were created by global banks that needed to move money around the world for their clients, in effect trading currencies between themselves.

This market is called the ‘interbank market’ with the rates being known as the ‘interbank rate’. The interbank rate is the rate at which Bank A may be prepared to sell US dollars to Bank B in exchange for Japanese yen. This rate is much like a wholesale rate and is unobtainable to the general public unless they are exchanging an amount of more than £50m.

The banks make money like any wholesaler in any other industry; they buy at one rate and sell it on at another and the difference in between is known as a ‘spread’.

What is a foreign exchange broker?

A foreign exchange broker works within the foreign exchange markets to buy and sell currencies for clients. The broker will have relationships with multiple banks around the world and will represent its’ clients in the FX markets.

Foreign exchange brokers provide a valuable service for a person or business that needs to transact internationally for a number of reasons:

A currency broker may have thousands of clients around the world and can obtain better pricing than a typical business through the basic principle of economies of scale. These ‘savings’ can then be passed on to clients.

Foreign exchange markets can move quickly and unpredictably and having an expert on your side can provide you with more flexibility and insight as to when to make that critical exchange or purchase.

An FX broker will offer a wide range of services on international transactions. These could include hedging, international payments or opening bank accounts in other countries.

How do you trade currencies?

The foreign exchange markets are the largest markets in the world – bigger than global stock exchanges, commodity markets like oil and gold and even the bond markets. The Bank of International Settlements estimates that over the course of 2016 nearly US$6 trillion was moved around the world every single day. That’s about 2.5 times the UKs annual GDP for 2016.

About 98% of the market is speculative trading with banks, hedge funds, investment trusts and pension managers buying and selling currencies for the purposes of profiting from moves in their favour.

The other 2% is made up of international trade; businesses settling invoices, companies setting up new offices, people buying holiday homes and all the other myriad of reasons why people and businesses send money overseas.

Trading currencies can be done via a bank or broker but a lot will depend on whether you wish to do so for speculative purposes or for actual payments. Some brokers specialise in speculation whilst others, like WorldFirst, do not speculate on markets and concentrate instead on international payments.

What is the difference between a forward and a spot contract?

When you buy or sell currency using a broker you enter into a ‘contract’ that authorises them to act on your behalf. A broker will typically offer two main types of contract: spot contracts and forward contracts.

What is a spot contract in foreign exchange?

A spot contract is one that must be settled within two working days of the ‘trade’, or payment. So if you agreed to sell euros and buy Hong Kong dollars on Monday, I would be expected to deliver the euros to the bank or broker that I have dealt with by Wednesday (i.e. two days later). Similarly, if I then decided to sell my Hong Kong dollars on the Friday in exchange for Thai baht with another broker, then my Hong Kong dollars would need to be with the broker by the Tuesday.

Spot contracts are used for both speculation and payment purposes; speculators will use them to invest in a currency immediately while those who need to send money across borders as soon as possible will also use a ‘spot’ contract. They are the most flexible of contracts and are popular for that very reason.

What is a forward contract in foreign exchange?

A forward contract differs from a spot contract in that settlement can occur at any point in the future. That date has to be specified when the deal is done but can be anything from 3 days’ time (Spot +1 day) to many years later. Some industries, particularly those involved in oil and petrochemicals, have been known to hedge as far as 25 years into the future!

There will be a difference between a spot price and a forward price although this has almost nothing to do with the expected performance of either currency over the time period. The calculation is instead based on the difference in interest rates in the two different currencies.

Forward contracts are predominantly used by speculators to invest in a currency over a longer time period than a spot contract could allow, while businesses looking to hedge their exposure to foreign currencies will use them to secure a guaranteed rate for upcoming expenditure or receipts.

An example of a forward contract:

If, however, you are prepared to sell sterling a year later than on a spot contract then you are ‘rewarded’ for delaying with a higher rate that compensates you for missing out on the interest that you could have accrued.

Similarly if you are selling rand and buying sterling but only wishing to do so in a year’s time then you are penalised for being able to hold onto rand at that higher interest rate by getting a ‘worse’ rate than spot.

For example, a UK business that is importing goods from Italy with payment due in 10 weeks’ time may want to guard against excessive volatility in the euro by buying a forward contract to sell sterling and buy the euro. While the spot rate may move up and down many times during this 10 week period, a forward contract will guarantee a rate that can be used in the future.

Where can I exchange currency?

There are many places to exchange currency and it’s important to find the best means for your needs.

Whilst cash can really only be exchanged at banks or bureau de changes, for individuals and businesses looking to make account to account transfers, international payment specialists, like WorldFirst, typically offer an easier, cheaper and faster means of transfer than traditional banks.

Register with WorldFirst now
^ Back to top ^