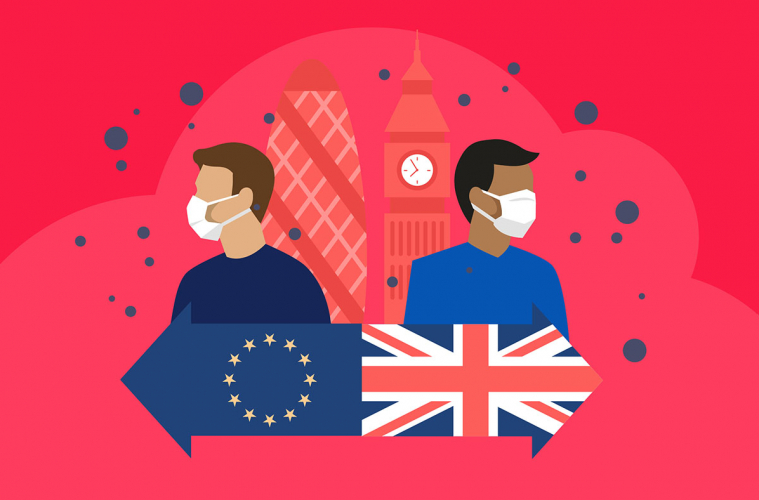 A political pandemic: The difficult relationship between Brexit and COVID-19

The question that came up repeatedly during our free COVID-19 webinar a few weeks ago – and in my inbox ever since – was “How important is Brexit now with coronavirus dominating the markets, headlines and seemingly every facet of our lives?”. At the time, I mentioned that Brexit was still of critical importance for the pound’s health going forwards and that Coronavirus is magnifying the impact on sterling’s recovery against the majority of its peers. However, with the obvious time restraints of a live webinar, this question is better answered in full, examining all of the factors from beginning to end.

Whilst it is obvious that coronavirus shook the pound violently upon the advent of lockdown; with sterling falling to eleven-year lows against the euro and thirty-five-year lows against the dollar, the foundations for the collapse and subdued recovery were set last December, as the UK Government laid out its plans for leaving the European Union.

When Prime Minister Boris Johnson and the Conservatives came to power with an 80+ majority and a mandate to “Get Brexit done” after the December 2019 election, the pound initially rallied to multi-month highs against most currencies, as the markets could finally breathe a sigh of relief and say goodbye to Government defeats, indecision and brinkmanship over Britain’s exit from the EU. Sadly, for the market, that sigh of relief was quickly replaced with a sharp anxious gasp, as within a week, Johnson had made it the first order of business to enshrine in law that the departure date was set at December 31st, 2021 and extension requests were prohibited.

Understandably, Johnson needed to ensure his promise to the vital ‘red wall’ voters was kept; for sterling, the extremely short deadline of a calendar year with no room to extend was exactly the kind of clarity the currency needed to promptly shed its election gains inside of a week. In essence, the UK Government’s position is based upon obtaining a ‘Canadian-style free trade agreement’ which it believes it can obtain within a year, as it doesn’t need to create the deal from scratch, it can borrow from the Canadian deal and insert the UK in its place. Needless to say, the notion that seven and a half years of work can be condensed and Tipp-exed over always seemed like a long shot, regardless of one’s thoughts on the Brexit process; it is the addition of a legally binding block on an extension that set the tone for sterling’s chances in 2020.

Fast forward to late February, with the blinkers now firmly on, the next realistic chance of upside for those betting on a strong sterling would theoretically come from positive outcomes of trade talks in the five rounds of talks dotted throughout the year. After all, the EU noted that talks would now likely be a far departure from those seen under May’s minority administration – the British people have spoken, and they are committed to leaving the European project now. It was thought early on, that if the UK could use the momentum and the majority returned from the election and bring that energy to the negotiating table, favourable terms would be easier to obtain. After all, every existing and incoming Conservative MP had signed up to Brexit and this was the most united the UK Government had been in nearly four years.

At this point, an unknown virus had hit Europe and talks were postponed as EU member states reacted to the developing crisis. Over in the UK, instead of watching and making plans based on the situation on the mainland, the Government shook sterling markets by announcing it was considering walking away from the Brexit talks by June if progress hadn’t been made towards securing a deal. Essentially, the Government had taken an overambitious deadline of a year and halved it overnight.

No sooner had the Government made its threat than the first COVID-19 deaths began to hit London. The initial shock pushed many in the market into safe-haven currencies such as the US dollar; the pound tumbled further still when it announced a total lockdown of its economy in mid-March. Despite the impact felt by the global economy as trading links were damaged due to coronavirus lockdowns, the one constant has been that the UK Government has steadfastly refused to halt the ticking clock on Brexit negotiations throughout the worst global pandemic in a century.

Seemingly, it wasn’t enough to have both the EU’s chief negotiator, Michel Barnier, and Boris Johnson himself struck with coronavirus, as virtual talks were proposed and tentatively restarted on April 20th. As most expected, the initial talks were written off as being largely unproductive, there was too much to do and in too little time. The EU has made it clear where its stands, with German Chancellor Angela Merkel pushing for an extension to save the UK and EU from the damage of a no-deal on top of the dip caused by coronavirus. That being said, the EU does find itself in a far easier position on this – it doesn’t have to juggle a commitment to an electorate that is still very recent in the memory; it was the UK who chose to leave after all. Realistically, for the UK economy and sterling, its future hinges on one key decision that Johnson, Cummings and the cabinet need to come to on; namely, does the UK keep its word to the voters, or admit these are uniquely mitigating circumstances and ask to extend the negotiation period make things worse, a decision is needed within an even shorter period: June 30th is the last date the UK may ask the EU to extend.

It is always of critical importance to remove personal political preferences from conversations on currency movements and, instead, examine previous events and the wider picture. In this respect, when looking back at the reaction of previous extensions and sterling, it seems that an upward rally would be on the cards if an extension is sought: the UK could focus on getting out of the coronavirus dip and the Brexit can be kicked firmly down the road.

As cynical as it sounds, the brutal truth is that the pound is at a unique disadvantage, it is carrying the additional weight of Brexit around whilst most countries have only coronavirus to contend with. If the UK can not ease the burden by utilising an extension or a huge turnaround on infection numbers, sterling could quickly find itself at the bottom of the pile of currencies making a better post-coronavirus comeback. With two months left to play, it’s getting dangerously close to now or never.

How WorldFirst can help