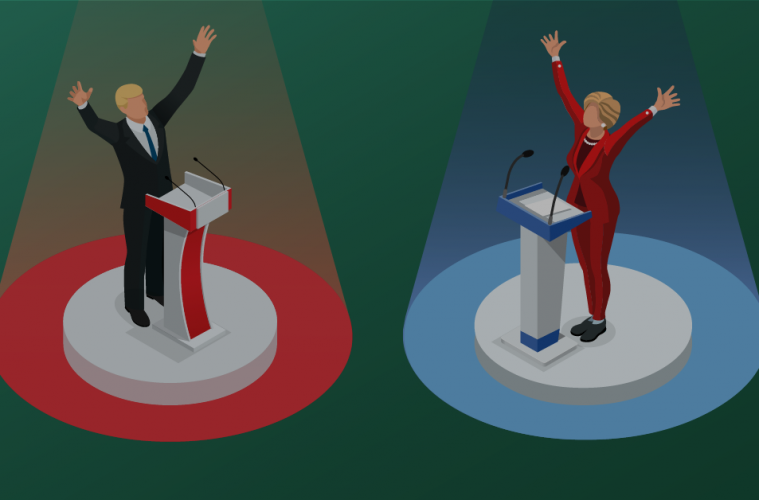 Who’s the strongest presidential candidate for the economy?

In January next year, current US President Barack Obama will hand over the keys to the White House to (more than likely) one of two different candidates: Democrat Hillary Clinton or Republican Donald Trump.

Both the Republicans and the Democrats have very different track records on a number of different indicators: from the unemployment rate to real GDP growth and from domestic satisfaction to the strength of the US dollar itself.

We dissect and analyse these trends in the following piece to answer the question: which is the best political party to run the US economy?

Across the past four decades, the US has had seven different presidents (three Democrat, four Republican), has undergone six economic recessions, five wars and hosted four Olympic Games. All these seismic events take a toll not only on the economy, but also the reputation of the leader of the country at the time. Here we look into which presidents’ reputations are deserved and who has the poorest track record. 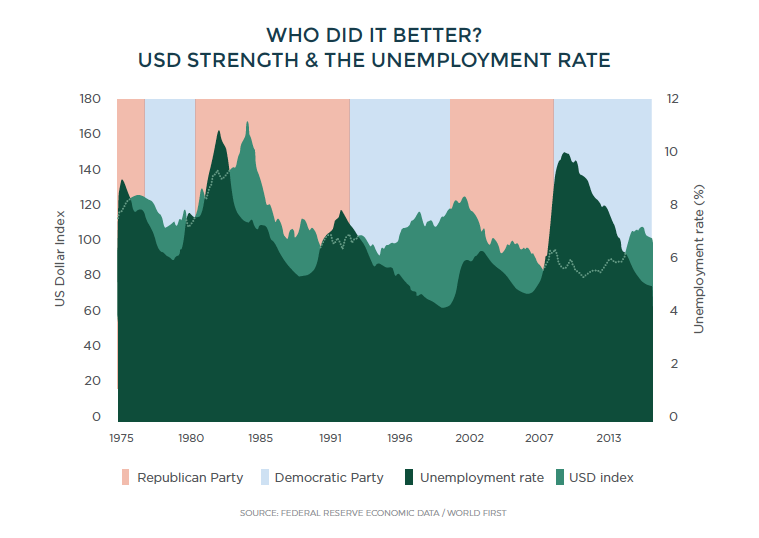 On unemployment, we found that not only did Republicans have a tougher time in reducing unemployment across the time of their tenure, but they were also in office at the beginning of the two largest unemployment-inducing recessions over our survey period (1981-1982, 2007-2009).

The Democrats have a far more successful track record at reducing unemployment, with Obama’s administration most recently cutting the jobless rate by close to three percentage points to below 5%, the lowest level in almost ten years.

US Dollar Index
The strength of the US dollar is highly contingent on not just domestic, but international economic strength. Furthermore, strength of the dollar is a mixed blessing for domestic business as importers find their cost base falling, while exporters face lower and tougher profit margins.

As such, it’s difficult to ascribe a stronger USD a political objective, and therefore which political party are superior to the other when it comes to exchange rates.

However, it is clear that a Democratic White House most commonly coincides with a stronger US dollar. In the most recent examples, both Bill Clinton and Barack Obama oversaw an appreciation of over 10% in the USD Index. Running counter to this, a Republican president commonly means a weaker US dollar, with Gerald Ford in the mid-70’s the last Republican to see a stronger dollar during his time in office.

GDP Growth
One of the most popular and effective methods of measuring economic strength is the growth (or lack thereof) in Gross Domestic Product – effectively the sum of the monetary value of the nation’s consumption, investment, government spending and trade balance. The US has grown at an astonishing rate (over 1000% since 1975), but that growth has often been lumpy, uneven and hindered by recessions, stagflation and misguided policy. 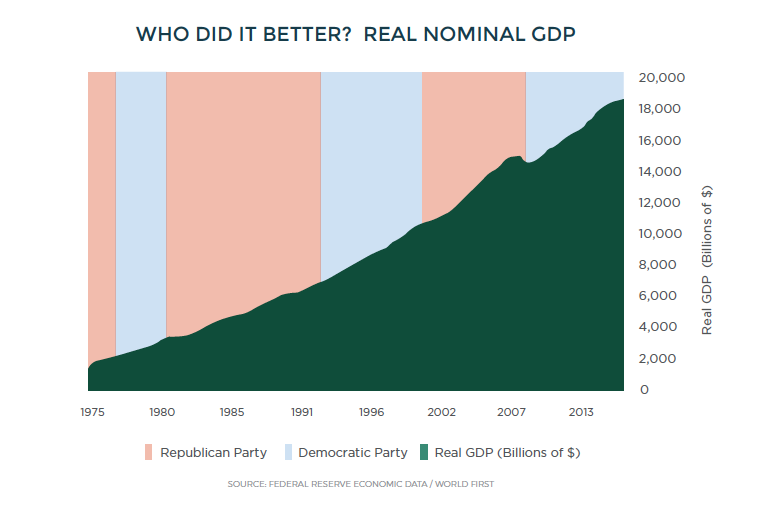 Across the tenure of Republican presidents, the US economy grew by 158.5% an impressive record that beats the Democrats’ 141.1%. However, adjusting for their longer period of time in office (by 4 years), a Democratic president will usually oversee an annual growth of 6.1%, beating the Republican’s 5.8%.

Taking these three indicators into account, it’s clear that the Democratic Party have a stronger track record in managing the economy via cutting the rate of unemployment and stimulating economic growth. The Democrats also tend to oversee a stronger US dollar and with the Federal Reserve still seeing higher, rather than lower, interest rates in the near future that could remain the case if current odds are to be believed and Hillary Clinton becomes the 45th president of the United States.

Whether we welcome a democrat or republican into the White House in November, make sure your business is prepared. Find out how World First’s tailored foreign exchange solutions can help you make the most of your money – Speak to one of our currency specialists on 1800 701 540 or visit our website.