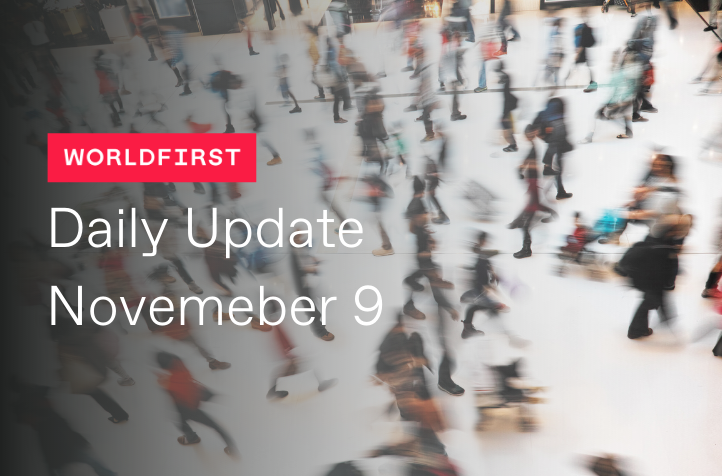 UK
Friday’s trading session concluded with PM Boris Johnson stating that a Brexit deal is there to be done and a call scheduled with EU President Ursula von der Leyen. However, these talks resulted in similar conclusions as previous talks with many significant differences remaining. They both separately advised that talks will continue throughout this week and market participants remain optimistic that these issues won’t derail talks.

Looking ahead to this week, BoE Governor Bailey will start the week off with a talk before labour market data is released on Tuesday. The claimant count is forecast to increase to 78,800 from 28,800 whilst the unemployment rate is expected to rise to 4.8%. This is as a result of the growing battling the UK faces with COVID-19 and associated lockdowns. Attention will then turn to Thursday with Q3 GDP, Trade Balance and Production figures all due for release. Now that the US Election is in the rear view mirror, for now, poor economic data could see the pound struggle over this week. Currently, the AUDGBP pair is trading at 0.5525 (1.8099).

Australia and New Zealand
Last Friday the RBA re-confirmed that they are open to further monetary easing after already cutting rates to 0.1% in their monetary policy statement. This was already largely known in the market whilst at the time investors were more concerned about the results the US Election. An announced Biden victory has seen the AUDUSD rally to 0.7275.

For the week ahead in Australia, we have Westpac Consumer Confidence this Wednesday and Consumer Inflation Expectations on Thursday. Key focus in New Zealand this week will be the RBNZ Interest Rate decision and rate statement announced this Wednesday. The forecast is for interest rates to remain at 0.25%, but the accompanying rate statement will offer some indication on their standpoint of a negative cash rate. This Monday we will have no economic data releases from both Australia and New Zealand. The AUDNZD pair opens this morning at 1.0715.

USA
The USD continued its downward slide to end the week nearly 2% lower, as markets priced in a “soon to be announced” Biden win. Being announced as the winner of the 2020 US election, the President-Elect Joe Biden will now begin the task of assembling his transition team to assist in the building of his cabinet over the next 70 days until inauguration. However, with the democrats unable to form a majority in the US senate, this dampens Democrats ability to pass through legislation without negotiating with Senate Republicans; specifically, a stimulus bill. Non-farm payrolls for October came in better than expected at 638,000, slightly less than the previous months 672,000. Unemployment ticked down to 6.9% spurred by job creation.

Looking ahead, all eyes will be on the remaining states yet to call their counts. Markets will also be keeping a close eye on any legal challenges that current President Donald Trump might make. Onto data, we see several speaking events where Fed members will be speaking at tomorrow. JOLTS job openings for September will be forecasted at 6.2 Million openings and ending the week inflation data will be released with markets expecting an increase to 1.3% on the annual rate. Currently, the AUD is buying 0.7255 USD.

Europe
Looking ahead this week, now that we have clarity on who will be the next US President the market will look more towards local data to determine which direction the Euro. This week will have multiple speeches from European Central Bank President Lagarde with the first today followed by one overnight on Wednesday and then Friday. On Monday this will be accompanied by low impact data as we have the German Trade Balance and a German 10-Year Bund Auction. Tuesday then brings the first big release as we have the German ZEW Economic Sentiment for Germany and Europe where the forecast for Germany is a strong drop from 56.1 to 40. Wednesday then has no key releases while Thursday we will see the German Consumer Price Index and the European Central Bank’s Economic Bulletin, and the European Group will meet. We then close the week on Friday with Preliminary GDP figures from Europe for Q3 where growth is forecast which will be accompanied by French inflation data and speeches from several European Central Bank members and members of the German Bundes Bank.

With the US elections behind us and risk sentiment up as a result of Biden being declared victor the market will look more closely at Europe again and the impact of the second COVID-19 wave. With some key releases being forecast to drop as a result it will be interesting to see if this will change risk sentiment or mainly will affect the Euro. 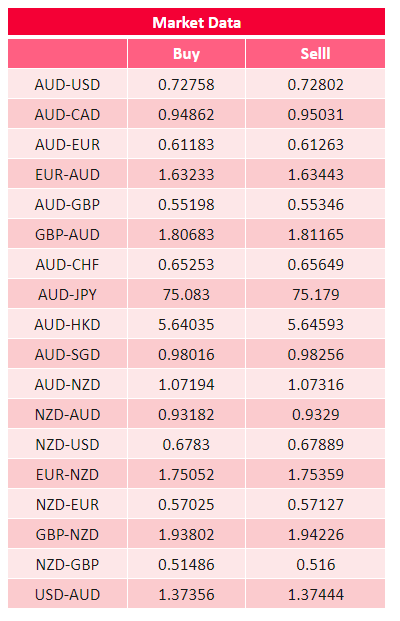 All rates shown are indicative market rates and should not be used for trading purposes. Prices correct as of 09/11/2020 09:46.