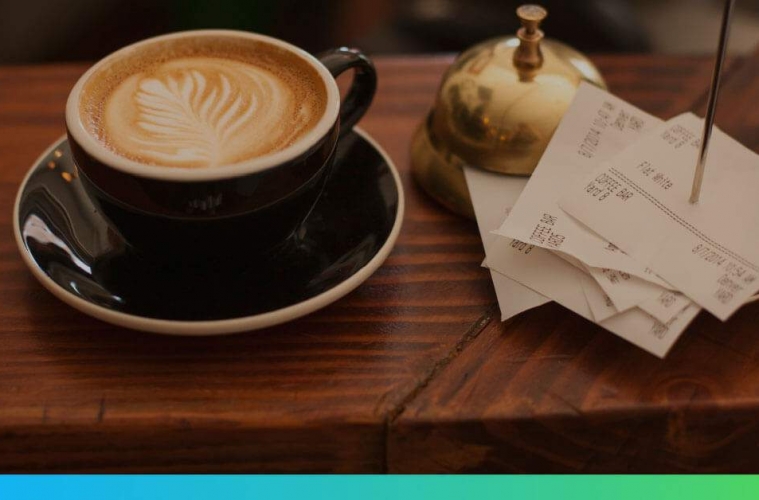 Coffee beans, just like currencies, have their price determined by the markets. As such, global events, from weather to politics and economics can have a profound impact on the price of your morning coffee. We take a look at the evolution of the price of coffee over the past few decades to discover the most significant determinants of your daily  espresso. 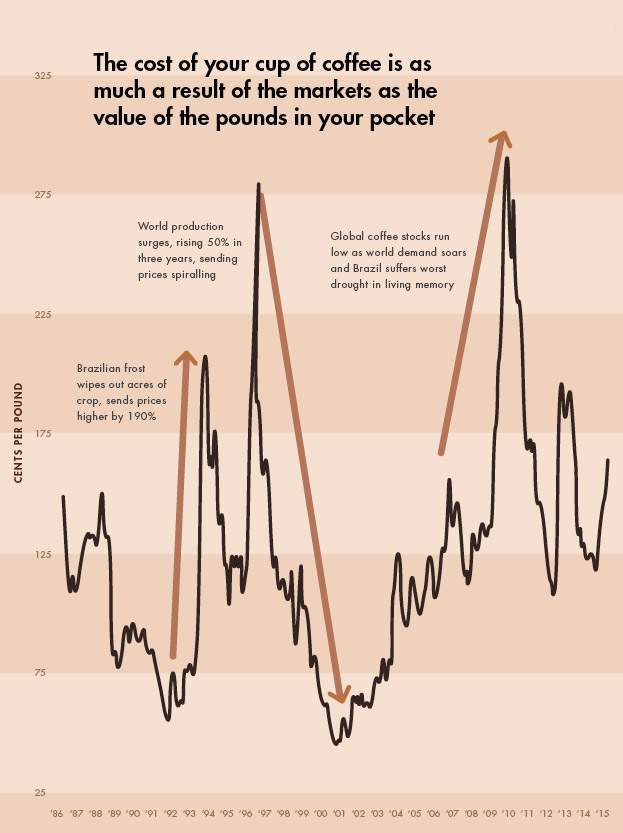 By a significant margin, the world’s largest coffee producer is Brazil, with over 10,000 square miles being dedicated to growing both Robusta and Arabica beans, which make up roughly a third of global coffee bean output. Therefore, when the weather turns for the worse or there’s a bumper crop in a given year, the country’s producers can send shockwaves through the global coffee market which ultimately has a dramatic impact on the cost of your beloved beverage.

After the deregulation of the coffee markets in the early 90s, producers were given free rein to flood the market and lift their sales volumes. The net effect of this was low coffee prices for around half a decade, until the newly deregulated coffee market hit its first snag: Brazilian frost. The so-called ‘black frost’ hit plantations in June and July of 1994 wiping out between 50-80% of the harvest in the states of São Paulo and Paraná. As a result, prices rose to all-time highs of $2.09 per pound, an increase of close to 200% from the lows of the early 90’s.

As is often the case in markets that dramatically shoot upwards, these price rises couldn’t be sustained. Suppliers were all too happy to sell their wares at the new, higher prices. The increased revenue on the table caused global production in the years following the Brazilian frost to shoot upwards by over 50%, hitting close to 8 million metric tonnes by 1999. The market then snapped under the weight of so much extra supply, with prices tumbling from $2.75/lb to as low as $0.43/lb in the early 2000s. This slump in coffee prices was quickly followed by a different phenomenon – the explosion of the world’s best known coffee chain: Starbucks.

Quickly following the slump in coffee prices, the number of global Starbucks branches exploded. The company grew from a mere 3,501 stores to 17,009 stores at the peak of the coffee boom in 2011. And that’s not the only thing that grew at Starbucks. Over the same period, every one dollar invested in the company’s equity would have returned you over 300% in profits.

While the popularisation and democratisation of the lowly espresso can’t be solely attributed to the Seattle coffee peddlers, it certainly harkened the arrival of a new style of coffee consumption: high quality, easily accessible, widely customisable and most importantly: cheap. This new, fashionable way to drink cappuccinos brought customers in their droves, lifting the chain’s revenues from $2.2 billion in 2000 to $19.2 billion in 2015.

Naturally, the world’s foremost coffee producers were unable to meet this new, unquenchable desire for good quality coffee. Their 1999’s bumper crop proved unsustainable in the face of new frosts, a drought in Brazil and supply issues in Vietnam and Colombia. This supply constriction then led to another steep rise in the price of coffee which reached the top of the market in 2011 resulting in the most expensive coffee in history at $3/lb.

The current price of coffee sits squarely in the middle of the market at $1.40/lb, but this could quickly change as it has many times over the past 30 years. As tastes continue to mature and the global middle class swells, it’s clear that coffee demand is unlikely to tail off any time soon. The future price of your morning cup of joe, therefore, will largely be determined by the availability of coffee bean supply and the impact of key determinants (such as changing weather patterns and supply chain efficiency). So, the onus is on producers around the world to continue supplying sustainably, responsibly and consistently, to avoid the market meltdowns that have become more and more frequent since coffee was handed over to market forces 25 years ago.

Currency fluctuations affect so much more than just the price of your daily espresso. From the value of your property abroad to paying international school fees, make sure to   keep an eye on exchange rate movements