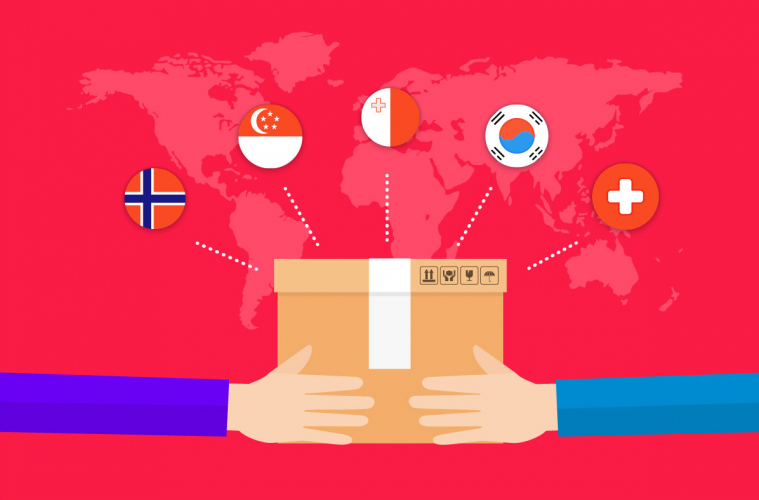 Trade barriers (until recently) have been falling away with more countries ‘open for business’ to UK online sellers. So, what do eCommerce merchants need to think about when starting a business or expanding their business to target shoppers abroad? And which country offers great opportunities for expansion?

UK merchants need to initially identify the untapped (or at least less crowded) market to go after, preferably one where their potential new shoppers have a healthy disposable income and there is minimal red tape to work through. Online sellers should look for that region to have a good online infrastructure, avoiding countries with a reputation for corruption, helping online sellers to conduct business in a controlled and transparent environment.

We’ve compiled a list of our top five contenders for consideration below:

When it comes to a high quality of life and excellent places to do business, Norway, like its Scandanavian neighbours, frequently tops the list. Digitally advanced with a strong economy, a major advantage for online merchants is that Norwegians are early adopters, willing to adapt and pay for new technology. It’s the ninth most business-friendly country in the world, according to the World Bank, and the fastest growing city in Europe [1]. These are just some of the reasons that make it a relatively easy location to set up a business.

However, taxation is not the lowest, and although there’s access to a skilled workforce, with lots of talent in the IT sector, it comes at a price. It’s a small country of just 5 million people, so fast-growing companies will need to incorporate and go global early [2]. The cost of living is high – its capital, Oslo, is one of the most expensive cities in the world in terms of property and eating out – but the flip side of that is that you will have access to excellent hospitals, schools, and childcare provision. All to be considered in terms of the local workforce you may employ.

The Norwegian krone is currently historically low against the euro and dollar, as shown in the graph from Walletinvetor.com below. This decline may be bad news for travellers with Norwegian bank accounts, but good news for online businesses.

Check the current state of play for the Norwegian krone against your currency of choice using our currency converter.

With its international outlook, low business taxes and favourable location in the heart of Asia, Singapore has become a favourite base for companies looking for a gateway into Asian markets, including China. Despite being the third most densely populated country on the planet (7953 people crammed into every square mile as of 2018) [3], Singapore scores consistently high in quality of life indexes. It is a major financial hub and the world’s second-busiest port.

The World Bank (WB) rates Singapore as one of the easiest countries in the world to do business in, coming in second in the WB rankings overall when compared to other countries [4].  Gross domestic product per capita is high and unemployment is low. What’s more, Singapore is valued as one of the wealthiest nations in the world. Added to this, its low levels of corruption and free trade agreements open up huge market potential, increasing its appeal further.

You can easily register and start your business online, and Singaporeans average age is 34, giving online sellers access to a young market of technologically-savvy shoppers to sell products online or via marketplaces [5]. Online sellers should keep in mind there is estimated to be 4.92 million internet users in Singapore with a penetration rate of 84% and 8.37 million mobile subscribers according to WeAreSocial.

In 2004, when other countries were banning iGaming, legislators in Malta introduced remote regulations for online casinos. Since then, the island has become a hub for companies from all over the world. More than 12% of the country’s gross domestic product comes from the iGaming industry [6] and its lucrative rules – under which iGaming companies such as online casinos can get a license valid for up to 10 years, in contrast to the one or two years offered by most countries.

In turn, this has attracted all kinds of online businesses from cryptocurrency businesses to companies who sell apps. It’s now known as the ‘Blockchain Island’, such is its reputation for being a place where crypto businesses flourish, and taxation has remained as low at 5%.

Firmly in the Eurozone, Malta uses the Euro currency and as such is host to the same currency characteristics as the rest of the EU. Find out how it is doing today via the WorldFirst currency converter.

Managing to be at the heart of Europe whilst not being a member state of the European Union (EU), Switzerland walks this unique tightrope well. It crops up in the Top 10 of just about every country ranking there is which measures the quality of life and incorruptibility, along with being one of the best places to run a business. It is also pro-business, has a low tax, and a decentralised political system. Switzerland has long been a haven for industries as diverse as finance, pharmaceuticals, high-tech businesses and of course, watchmakers.

The country is now also establishing itself as a base for cryptocurrencies with the area around Zug styling itself as ‘Crypto Valley’ [7]. As you’d expect, Switzerland has an excellent Internet infrastructure and a highly educated workforce. The Swiss are by far the wealthiest citizens of any major economy, which is what online sellers want in a shopper.

The strength and stability of Switzerland as a country is indicative of its currency. As a result, the Swiss Franc has emerged as one of the best alternatives to the U.S dollar and is seen as a trusted reserve currency. Use the WorldFirst currency converter to see how the Swiss Franc is tracking.

South Korea boasts some stunning scenery, great shopping and Seoul and is becoming increasingly popular as a tourist destination. In terms of high-speed internet connectivity, its infrastructure is unparalleled. South Korea (officially the Republic of Korea) is the world leader in broadband and has an average connection speed of 25.3 megabits per second (Mbps), boasting the fastest average internet connection speed of any country in the world [8]. Added to this, 96% of its population are internet users [9]. It’s ranked fifth in the World Bank’s ease-of-doing-business [10] and is the 12th richest country in the world [11]. Wealth inequality is high, but its upper class is keen to spend the money it has, especially on high-end brands.

Wherever an online seller chooses to start their new eCommerce business or subsidiary, our FX specialists can guide merchants through the money transfer challenges they may experience. Contact us today as we’re uniquely placed to help online businesses.