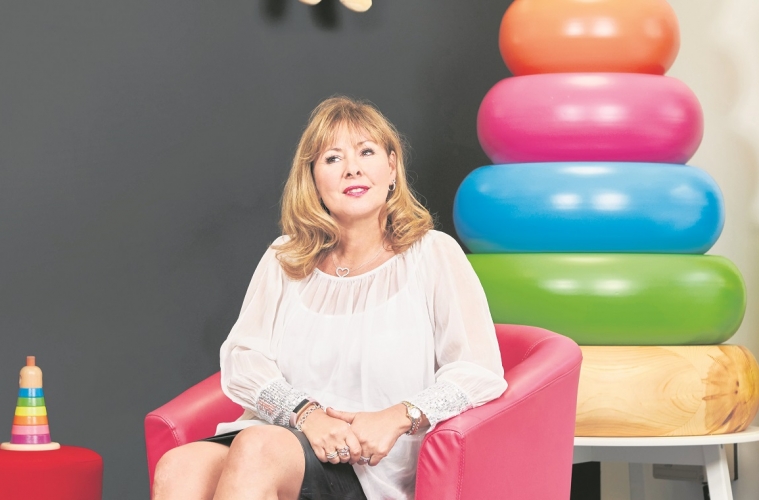 Successful baby and toddler food brand, Kiddylicious, is really getting  its teeth into overseas markets

For Sally Preston, the founder of Kiddylicious, the export journey began almost by accident. After launching the company from her dining room in Ealing, West London, in 2009, her snacks and meals for babies and toddlers quickly won fans across the UK. The brand instantly appealed to parents who were looking for a tasty product that was also healthy, and in appropriately sized portions. Then the phone rang.

“It was a buyer from Amazon in Seattle, who explained that they’d seen lots of people in the US buying our product via Amazon Marketplace – they wanted to know if we were interested in a more formal arrangement,” Preston recalls. “Very quickly, they helped us to find a distributor to handle our North American sales.”

Since then, Kiddylicious has expanded into 25 overseas markets. Exports totalled more than £3 million last year, around 20 per cent of the company’s total revenues, and Preston now expects overseas sales to surpass the UK business within three years.

That’s no reflection on growth in the UK, where Kiddylicious has overtaken
big names such as Heinz to become the second biggest player in its sector – with the market leader, Organix, firmly in its sights. It’s just that there are more hungry mouths to feed elsewhere – the babies and toddlers of the world obviously heavily outnumber their British cousins.

Just don’t mention Brexit. “It’s so boring,” Preston says. “If you look at the opportunities around the world, Brexit just isn’t worth worrying about – in China alone, there are more people on social media than live in the whole of the EU.”

Kiddylicious certainly has global horizons. China is already a crucial market for the company – not least thanks to a recent distribution deal with the ecommerce giant, Alibaba. Its meals also sell well in Australia and Norway, both locations where the business has been a pioneer in the snacking sector and therefore benefited from first-mover advantage. These are the three countries that the company has designated as strategic markets, where it thinks sales can reach £1 million a year within a relatively short space of time.

The rest of its overseas territories are divided into core markets, where Kiddylicious provides local distributors with sales and marketing support, and trading markets, where the company simply makes its products available.

New markets are joining the fold all the time. Preston is particularly pleased with a major new deal with the retailer Walmart, through which it will begin
selling in five Latin American countries. Costa Rica, Nicaragua, Honduras, Guatemala and El Salvador are exciting prospects, she explains, since the snacking market for babies and toddlers in each country is at an early stage, with little competition. South Africa, too, is on the agenda this year, courtesy of a deal with the Clicks supermarket chain.

The US, by contrast, became less important, given the fierce competition from domestic businesses, and the company withdrew from the market last year. Nothing ventured, nothing gained, reflects Preston. “We learnt a huge amount.”

She is equally pragmatic about how she has developed production and distribution. Kiddylicious works with 19 suppliers, each specialising in different product categories, from wafers and biscuits to ready-meals. Around half are based in the UK, with most of the rest in the EU, but the firm also works with producers in China and Thailand. “Look for specialist expertise wherever it
is to be found,” Preston advises. “We’ll look at credible suppliers from anywhere if we think they can give us the right quality.”

As for other words of wisdom for fellow entrepreneurs, Preston believes British businesses in her sector – and across the broader food and drink category – are hugely well-placed to sell all around the world. “The UK is seen as a real centre of excellence and quality,” she says. “If you’re nimble and quick, you can really capitalise on that appetite for British products.” 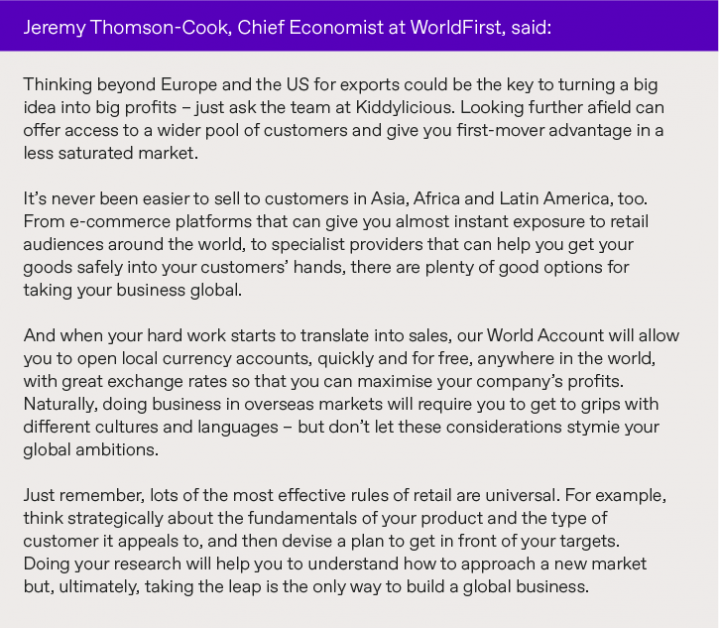 This article first appeared in The Sunday Times on June 17, 2018. To find out how WorldFirst can help you compete like a local business, globally, visit worldfirst.com/

How fintech companies have revolutionised FX and payments