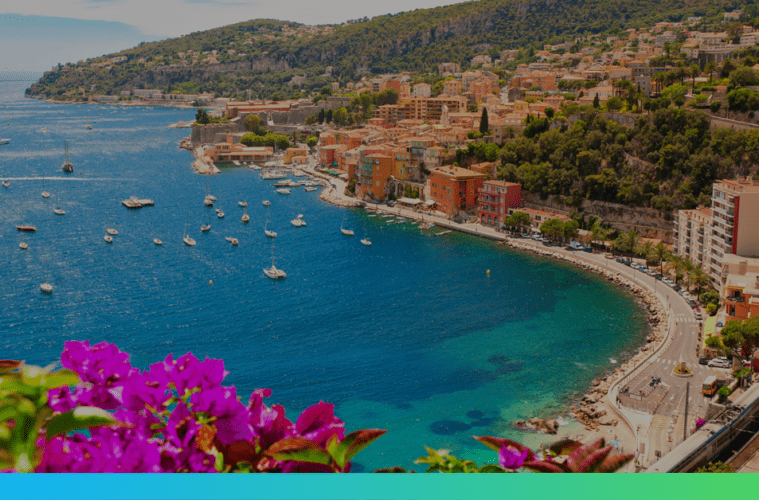 Our story: building a house in France

If you’re thinking of buying a property in France, or even building one, you should read on for a whole load of hints and tips. Also click here to read our complete guide to moving to France!

World First customers Andrew and Amber Le Coyte know exactly what it takes, having recently built a property in St. Tropez. They spoke to World First about their experiences.

Why the South of France?

It’s a familial thing. My (Andrew’s) parents used to go down in in the 50s, so for us, it was always going to be St. Tropez. I started going down there in my university days, I went down in a VW combi van with a few friends – the first time I went down without the family. When Amber and I got together, we started going every year. We started renting villas in a place called La Garde-Freinet, which is about ten kilometres behind the sea, and then we decided when we had kids it was too far from the beach, so we looked for a place closer to the sea. We came across this family oriented place in La Croix-Valmer, which is just the other side of a famous beach called Pampelonne beach.

So how did you bite the bullet?

But you didn’t stay there…?

Well, that was the first house, which we did up, but we were still looking in estate agents’ windows! And there was a plot of land, and in St Tropez, there aren’t any plots of land for sale, but there was one. So we thought let’s put this house on the market, see how it goes, and go for the land.

So nobody came forward with an offer for our house, so we got on with our lives, but a year later, the estate agent rang up and said, “we’ve sold your house”. We’d just finished the garden, and we hadn’t yet used the house with the landscaped garden, and we said we didn’t want to sell it anymore. But the estate agent said we had to sell it – we thought it would be similar to England, where you can drop out at any time, but if someone offers you the asking price, you have to sell it, otherwise you can be sued for the agent fees – 6%. But luckily, the land was still there, and we bought it. It was obviously meant to be.

So onto the buying process, what are the big things to watch out for?

You’ve got to be careful in France. Once you sign to say that you want it, you get seven days, and then you can’t contractually get out of it. The only time you can get out of it after that is if you can’t obtain a mortgage.

For clients that are buying abroad, it’s very important that you realise what you’re getting involved with, and that you understand the contractual obligations. You can be in a situation where if you haven’t arranged the funds, you could be caught out.

There are a lot of fees. You’re looking at around 10% of the cost of the property on top of what you’re paying for the property itself. These include the notaire’s fees of 1%, the government fees and the 6% agent fees.

I think you ought to be aware of these taxes. There’s a council tax, a taxe fonciere which is dependent on the surface area of the house and one is based on the environment – the lighting etc.

Are there extra things to look out for if you’re building a house?

If you’re building a house, there is also a one off tax – another tax – which was, in our case, nearly €10,000 for so-called building of the roads – although for us, there were no roads built – and drainage, although no extra drains were required

French builders want you to sign for their contract, and you have to keep on paying them. If you don’t then pay to the end, they will sue you for that money. For someone that wants to do stage payments – as and when each job is done, foundations, walls etc – it’s very difficult, and we didn’t appreciate that at the time. They want to start a build and go through to the end, and they want 50% upfront for a job, rather than being paid at the end. Our idea of clearing the land and waiting a year, putting the foundations in and waiting for a year – that wasn’t going to happen. Suddenly you can find yourself in a position where you’ve got cash flow problems.

If you have a self-build in England you can claim the VAT back, but with a new build in France you can’t. For environmental things you put in, like solar panels, you don’t get any benefit either.

Any tips, anything you’d do differently next time.

I’d do a lot more research, and I’d be careful who I chose to build the house. I think I’d have an architect rather than a project manager. I wouldn’t be in a rush to start anything.

If it’s a retirement plan, I’d wait until you’re retired and you’ve got the time to do it, because when you’re busy working in England, things get forgotten in France. You need to know what’s going on all the time and have plenty of time for visits, because the builders like to see you over there. They like to see who they’re working for.

How important is it to speak the language?

I think it’s important to at least try to speak a little French. If you don’t speak any, I think you would struggle. The French like you to try, if you try they will come back with the English if they speak it.

We’re part of an expat community, which includes some French, German and Dutch expats, where you meet friends, but also if there are issues, you can ask them and they will know somebody who knows what to do. Isolation is not good. We pay €40 a year, and we’re part of this club. We’d very much recommend it.

How did you end up using World First for your international payments?

I previously used someone else for my currency transfers, then someone suggested I used World First. The rates were better than I was getting so I went with them. Relationship is very important. It’s good to have a rapport with somebody over the telephone, and when you’re talking about transferring hundreds of thousands of pounds, the security of knowing it’s safe is important. When you do a trade, get the email, then you confirm it, I always feel quite safe.

But a word of warning – you should be very wary of sending the money to the wrong person. The builders suddenly change their bank without telling you. That happened to us, and we got our money back, but it was a little stressful.