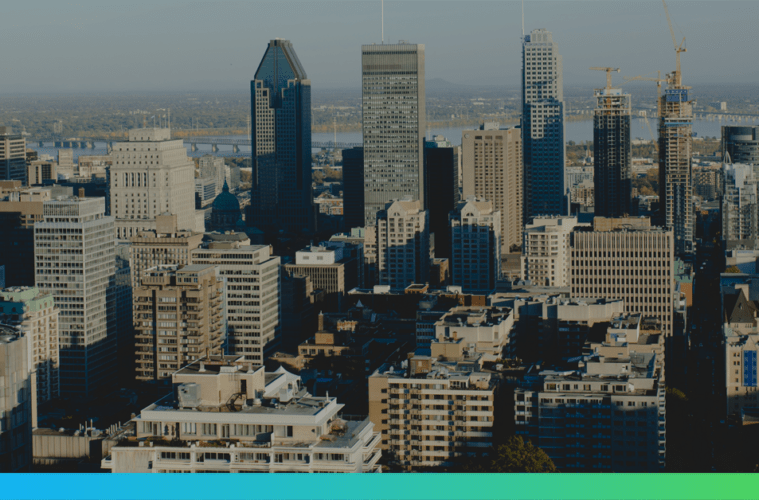 Canada – there’s more to it than snow and maple syrup. And here, in this five minute guide, we show you how.

If you’re moving from the UK to Canada, the first thing to get your head around is the fact that Canada is so blooming BIG! It’s great to have plenty of choice, but here, there’s almost too much. Whether you’re looking for city life, rural life or a life in the mountains, there’s something for everyone here. Over in the west, you’ve got Alberta with its mountainous backdrop and thick forests. To the east, New Brunswick features more aquatic pleasures – rivers and lakes – and buzzing cities.

Other provinces along the Atlantic coast include cultural and history-rich Newfoundland and Labrador, and cold, affordable and friendly Nova Scotia. For those looking for something more lively, Ontario’s big cities, Ottawa and Toronto, are popular choices, and with Ontario bordering the US at the south of the country, the weather’s warmer too. Mainly French-speaking Quebec can be found in the north east, and beautiful, sunny and quiet Saskatchewan sandwiched between Alberta and Manitoba.

Vancouver, British Columbia – known as one of the world’s most liveable cities – is popular with expats for its greenery, culture and opportunities, and with 333 days of sunshine a year, it’s little wonder Alberta’s Calgary is another top choice. But really, Canada is so incredibly vast, and the choices so numerous, that you really need to do your research.

According to the latest affordability rankings from Deutsche Bank, Canada is the fifth most expensive place to live in the world – cheaper than Australia, New Zealand, the UK and the US, but more expensive than the likes of France, China, Germany, India and China – Hong Kong.

When in comes to the general cost of living, you’ll pay the sorts of prices you’re used to at home – clothing, eating out and entertainment prices are much the same as in the UK. However, you’ll find that transportation costs – public transport and petrol – are a lot less.

Bear in mind that due to the cold climate – particularly in the north of the country – you’ll be spending a lot more on energy. Also, because of the distances, any travelling that does need to be done could prove to be expensive.

Buses are the way that most people get around the cities, but these tend to be geared up for getting to and from work and usually therefore don’t run at the weekend – or at least not too frequently. If not bus, take the subway in Toronto or Montreal, or the monorail in Vancouver. Or flag down a cab in most of the main cities – it’ll cost you around $3 (£1.50), then $2 (£1) per kilometre.

In more rural areas, getting about by public transport isn’t so easy, so do it by car – at least the petrol’s cheaper than back home.

Schools are of a generally high standard in Canada, and there are plenty of resources available that will allow you to make a decision about where you send your children – every school is fastidiously and transparently ranked. There’s no nationalised system, with individual provinces and territories charged with making decisions over their own education system. Kids will usually be required to attend school between the ages of six and 16, and parents must decide their children should attend a public or private/international school.

Rather than going over to Canada and thinking you’ll get a job when you get there (that’s probably not going to happen – not easily anyway), it makes more sense to start your research beforehand. Check out some of the companies in your field, and tap them up. Ask if they’d consider seeing you once you’ve arrived. It’s all about banging on as many doors as possible and getting your name out there. Most of the jobs are in the service sector, the rest are general in manufacturing and natural resources – but be warned. Getting a job as an expat is not easy, so patience may be required.

Canada is obviously a pretty big place, and that means there’s a fair bit of variety in the weather there. That Generally, though, there are four distinct seasons. The summers are warm – less so towards the north of the country, and positively balmy in the south. And when it comes to the winter, you’re going to know about it. The temperature often doesn’t come above zero for months, and the snow envelops everything. That said, over on the west coast – places like Vancouver, for example – there’s a much more temperate year-round climate, with less hot summers and less harsh winters.

Canada’s big cities provide great – and varied – nightlife. A night in Montreal is relaxed but lively. From late night bars to jazz clubs and discos, there’s something for everyone – and it goes on til late. As the Toronto International Film Festival is packed away, as summer starts to give way to autumn, expect an explosion of events, from street festivals to dance events and concerts. The young vibe of Vancouver is popular for those up for a wild night out, with a host of classy, trendy and big – very big – clubs.

Already made up your mind? See how World First could help transfer your money to Canada.