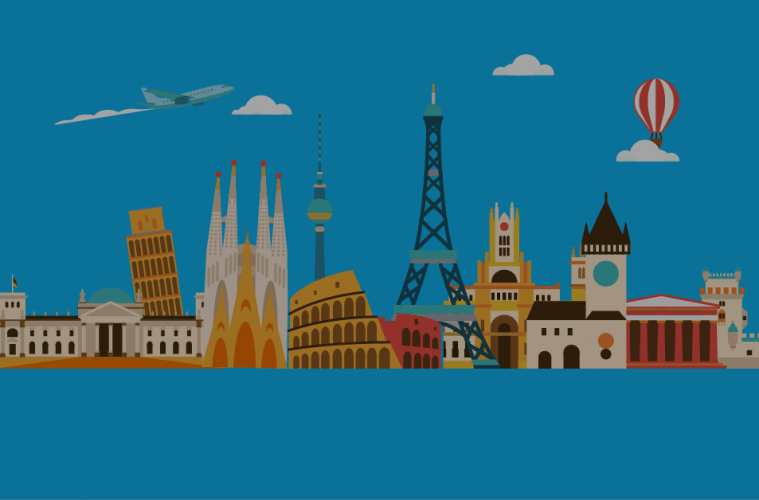 Moving abroad to work is surely one of the most alluring challenges that presents itself to many of us, and there is a lot to consider when thinking about how to move abroad. Foreign work experience looks great on the CV – especially if you can pick up a new language and also shows that you can operate outside of your comfort zone. It demonstrates adaptability and the broader experience will hopefully add a whole new dimension to the work-life balance. Ideally it should be like taking your holiday to work each day.

Increasingly, business leaders recognise the value of living and moving abroad to work. According to the Harvard Business Review, globalisation means that the need for truly global citizens to lead organisations in business, nonprofits, and government is far greater than in the past.

Brits, for example, often consider moving to Australia, the US or Dubai to get the benefit of the climate without the burden of having to learn a new language. However, there are loads of opportunities many miles and time zones closer to home in Europe and despite the headlines, numerous EU economies are thriving right now.

Even though Britain has voted to leave the European Union, Brits are still able to move anywhere within the Eurozone with very few restrictions – and that’s unlikely to change for a year to two at the very minimum. This means that although it is still unclear what migration within Europe will look like in the future for Brits following Brexit, there are still opportunities out there for those who want to take the plunge.

Tempted? Here are the top five European cities to consider if you are considering how to move abroad from the UK for work.

The economy in Ireland’s capital is booming at the moment. The country has one of the fastest growing economies in Europe – with GDP growth of 7.8% against the 1.9% average for other EU countries. This comes after its economy imploded in the global financial crisis in 2008. Practically all of the biggest technology companies in the world have their European headquarters in Ireland including Facebook, Google and IBM. This is because of low corporate tax rates and availability of a talented local workforce.

Its unemployment rate has also declined to 7% – the lowest level since 2008.  Additionally, if the financial services sector shifts away from London as a result of Brexit this could positively affect the city by increasing the demand for skilled workers.

Ireland has the strongest economic growth forecasts this year at 6.9%, according to the World Economic Forum.  And as Ireland is very close geographically to the UK, with English being the most widely spoken language, Dublin would be an obvious choice for those who aren’t that keen on learning a new language.

The historic city of Lisbon’s creative economy is thriving. The LX Factory, on the site of an old industrial complex, is the cornerstone of the vibrant arts and culture scene that houses projects, design businesses and creative entrepreneurs. It boasts a sunny climate, is close to the beach, has wonderful food and is just three hours away from the fashion hub Porto where there are lots of factories.

Furthermore, Portugal’s non-habitual residents’ scheme is Europe’s best-kept individual tax secret. This special tax regime has a flat income tax rate of 20% for certain income, a fact that increases the attractiveness of the country, according to a report published by accountants PwC. The Portuguese tax system offers attractive opportunities in relation to wealth, gift and inheritance taxes as well as business and rental income, capital gains, dividends, interest and pensions. If you want a job outside the tourist industry learning Portuguese is a must – but picking up this skill will enhance your CV when you return to the UK.

Stockholm is the birthplace of Skype and Spotify and the city has a growing reputation for being a major tech hub after Silicon Valley. The capital, founded on an archipelago, is the cultural, economic, media and political centre of Sweden. Local taxes are high but the standard of living is also correspondingly high.

Its economy is flourishing compared to much of the rest of Europe and there is great demand for skilled labour. The last decade has seen significant growth in many other areas including finance and entrepreneurship – indeed it is the main centre for corporate headquarters in the entire Nordic region. As a result, it has one of the strongest growth forecasts in Europe, at 3.2%, and is ranked sixth within the EU according to the World Economic Forum. Sweden as a whole has strong projected growth at about 3.7% this year easing to 2.8% in 2017. On the downside some warn that there is an issue with the availability of housing – but anyone familiar with the London property scene will be accustomed to that. Work-life balance is also a massive part of the culture and the country is experimenting with 6-hour workdays, drawing on a concept called Jantelagen – the idea that no one is better than anyone else.

The capital of the Czech Republic is located at the heart of Europe and is famous for its baroque architecture, rich culture and wonderful beers. It is a short drive away from Warsaw, Vienna, Dresden and Berlin and has a very good public transportation system.

The country has the second lowest unemployment rate in the EU at 4.1%, as of June 2016, while Prague has a welcoming start-up community and is relatively cheap compared to Paris or London. In the last decade, the city’s economy has undergone a major transformation – manufacturing has decreased and there has been rapid growth in the newly privatised service sector and tourism. Industries like financial services, IT, property, consulting and advertising have expanded. English is widely spoken in the city and it has become a tech hotspot for a variety of reasons including low prices, a business-friendly atmosphere and there is little competition from large multinational firms.

Berlin, the capital city of Germany, is a lively cosmopolitan city which was famously called by its former mayor “poor but sexy”. But despite this it is a great place for creatives, has a reputation for attracting fintech companies and has a flourishing start-up scene.

“Berlin is a boom town for companies focusing on fintech, e-commerce and mobile apps. A growing number of multinational companies are coming into town, opening incubators, accelerators, and digital units to co-operate with the startup community,” according to Cornelia Yzer Berlin’s Economics, Technology and Research Minister.

For artists or those who want a career at a start-up, Berlin is probably the best place to be. However, its reputation for being affordable is changing as more affluent migrants move into the area.

These 5 great cities show that the world really is your oyster. If you want to learn a foreign language, continental Europe is great. Dublin and Stockholm are the best if you want to work for a large corporate. You should head to Prague if you want to get involved in the start-up scene whereas Berlin and Lisbon are good value for money and have flourishing arts scenes. But the best news is that whatever you earn – right now when you convert it back into sterling you’ll get a pay rise!

Still considering how to move abroad?