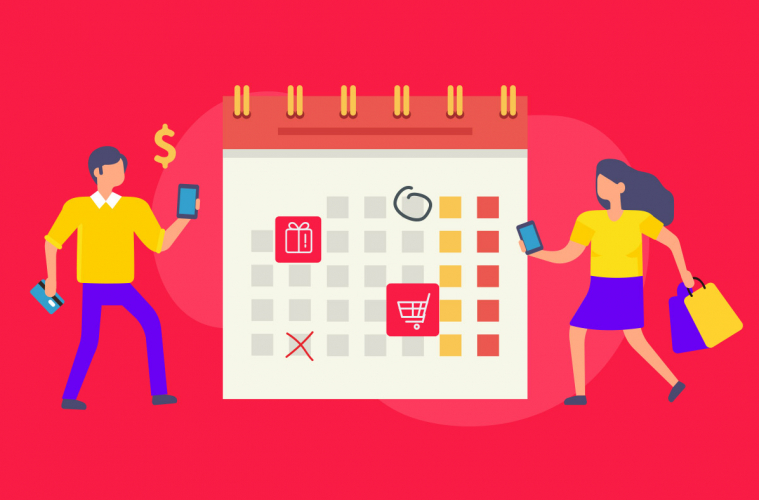 With 2020 now upon us, planning should now be well underway for this year’s success. Top brands don’t leave it till the last minute, they will all have plans and campaigns ready to go months in advance. To help guide your planning, WorldFirst plots out key retail dates in the next coming 12 months.

It’s the Year of the Rat this year – the first sign in the Chinese zodiac, the Rat signifies new beginnings, wealth and good fortune. Sounds good! It’s also a huge date in the Chinese retail calendar, with retail and catering enterprises receiving revenue of over 1 trillion yuan (£108.5 billion) during 2019’s six-day Chinese New Year festival, according to the Ministry of Commerce.

Commemorating the establishment of the first European settlement at Port Jackson, now part of Sydney, in 1788, it’s a great excuse to open a tinny or two and re-watch Muriel’s Wedding.

The glitterati of the fashion world descend on the UK as London designers showcase their new collections – and thanks to the power of social media and influencers, people are more connected to this event than ever before, which is watched all over the world. Instagram has seen an opportunity in London Fashion Week, and since the launch of last year’s shoppable posts, consumers can directly purchase from the app. Fashion brands on Instagram offering customers access to their collections straight after the catwalk shows are set to enjoy a spike in sales. Selling to fashion lovers from all over the world, British retailers can benefit from working with an FX provider like WorldFirst to optimise their cross-border transactions.

British lovebirds upped their spending on flowers, cards, and dinners-for-two to add an impressive £1.4 billion to the UK economy in 2019, with an estimated £391 million spent on dining out and £267 on romantic getaways, according to data from IBISWorld. This despite a general economic malaise at the time. It truly is the power of love!

A major day for the publishing industry, this is also something of a tricky date for parents who find themselves expected to put together a World Book Day outfit for their beloved children at the last minute. Or, of course, you could always just buy one. The figure for how much exactly was spent on ready-made Harry Potter outfits in 2019 is not known!

A date that’s growing in retail significance, International Women’s Day is an opportunity for firms to highlight the gender equality work they’re doing. For example, last year, in continuation of its ‘Shero’ campaign, Mattel made Barbie versions of women such as British model and activist Adwoa Aboah and Indian gymnast Dipa Karmakar.

Breaking news: Brits love spoiling their mums! Central England Co-op examined every purchase in the run-up to last Mother’s Day and discovered that gin and flowers were the premium purchases. The research also showed a large spike in the purchase of flowers in the morning of Mother’s Day itself – suggesting kids wait until the last minute to buy their gifts.

Good Friday can turn into DIY Friday quicker than you can say ‘Ronseal Quick Drying Woodstain’ although the fact that Easter is ‘early’ this year may prevent you from getting the step ladder and paint rollers out. Easter sales are a regular fixture of the retail calendar as stocks make room for summer lines.

The average child in the UK receives just shy of 9 Easter eggs a year, according to the Birmingham Mail. This equates to over 8,000 calories – but who’s counting!

A Muslim festival, Ramadan is a month-long period of fasting during daylight hours, after which Muslims come together in the evening to break their fast with a meal called Iftar. Mobile, online and social media usage is also at its highest during the night, with Facebook reporting that its usage grew by an extra 57 million hours and a peak usage time of 3 am.

Get your fascinator out of its box and dust off your morning suit, it’s that time of year when every British married-couple-to-be crosses their fingers and prays that the rain stays away on their special day. Will the weather gods be kind? Who can say! Weddings are a growth area for eCommerce, with bridesmaids leading the global charge away from bricks-and-mortar shopping – almost 40% of bridesmaids’ dresses are now bought online. 1 May is also May Day when retailers typically offer special ‘May Day deals.’

8 May – May Bank Holiday

Normally, the year’s first May Bank Holiday falls on the first Monday of May, however this year it’s been moved to Friday 8th to coincide with VE Day or Victory in Europe Day. This marks the day towards the end of the Second World War when fighting against the Nazis came to an end. Expect three days of commemorations and celebrations.

The most romantic football tournament in the world comes to an end at Wembley. Small teams may win it rarely, but small businesses can always get involved in an amazing day that rounds off the domestic football calendar.

Gardening is big business with Britons spending over £1.5bn a year on plants and over 2/3rds of Brits visiting a garden centre every year, according to the Horticultural Trades Association – and there is no bigger date in the gardener’s calendar than the prestigious Chelsea Flower Show. The Queen herself attends annually – and the head-turning hats worn by some of the attendees are as spectacular as the flowers.

Ramadan ends with the holiday of Eid. Muslims get dressed up in their best clothes, exchange gifts, and enjoy a feast with family and friends. Eid Mubarak, everyone!

Half term begins for the nation’s kids as everyone takes a day off at the end of May. Both parents and kids need entertaining as the days grow longer.

The biggest football tournament in the European calendar kicks off on 12 June, with games being held right across the continent – culminating, thrillingly, at Wembley Stadium, where the final is being held on 12 July. While many fans may choose to follow their teams in person, the world will congregate around TVs through June and July to cheer on their respective countries. Expect sales of food, drink, barbecues, replica shirts and all the paraphernalia associated with an England campaign to rocket further than the international team.

Novelty beer and socks are the typical order of the day for the dad that probably prefers you just let him watch the football in peace. Although UK shoppers spend less than half the amount on Father’s Day as they do Mother’s Day – an estimated £653 million in 2019, according to a report by GlobalData – it’s growing faster than Mother’s Day, with increased sales in every retail category.

It’s likely that Andy Murray’s hip injury will mean his face is missing from the Wimbledon courts this summer – but who knows – he could still rally to win it yet! And even if he doesn’t attend, there’s plenty to keep tennis fans like the Duke and Duchess of Cambridge entertained in the form of Rafa Nadal, Novac Djokovic and, of course, strawberries and Pimms.

Amazon’s biggest shopping event, exclusively for Prime users, is set to be a 48-hour parade of non-stop deals during which shoppers pile onto the marketplace to bag great deals on tech to luxury items to clothing and everything in between. In 2019, Amazon Prime Day sales amounted to an estimated $7.16 billion. But it’s not just Amazon retailers who benefit; thanks to the ‘halo effect,’ businesses that run discounts on Amazon Prime Day see, on average, a 40% increase in sales, according to research by Criteo. A massive date in the retail calendar, retailers working with an FX partner are strongly positioned to benefit from the opportunity for global trade that the event offers. WorldFirst supports businesses trading on Amazon, as well as most key marketplaces.

It’s going to be a long, hot summer for Olympians, competing under the heat of a sweltering Japanese summer sun. For the rest of us, it promises to be a glorious festival of sportsmanship, athleticism, and of course, horse dancing (AKA dressage)! The Olympic and Paralympic Games are set to provide an economic boost of around 32 trillion yen ($300 billion) to Japan, due to increases in inbound and domestic tourist consumption, and increased sales of electrical items (televisions) and more spending in the leisure sector. Online sellers working with an FX trading partner like WorldFirst will be better positioned to manage their currency needs for selling into the Japanese market during this busy trading period.

Music festivals abound, the days are long, and nobody wants to believe that summer is coming to an end. Summer sales for winter sun destinations and all that you may need are popular.

1 September – Back to School

The ‘Back-to-School’ rush, like Christmas, seems to get earlier and earlier. Uniforms, stationery and the latest gadget will all be in very high demand ahead of the academic year.

According to finder.com, a quarter of Brits bought a pumpkin for Halloween in 2019, at a cost of £29.2 million. With total Halloween spending at around £474 million, this festival of the dead just keeps getting bigger and bigger. No nasty scares there for retailers, then!

Overtaken by Halloween in the winter festival spending stakes, what was once a festival dedicated to foiling a plot to blow up the Houses of Parliament has long since turned into a night of bright lights and loud bangs.

The anti-Valentine’s day has become a phenomenon in the past 5 years. In 2019, Chinese eCommerce company Alibaba, which founded the festival, reported sales of 268.4 billion yuan, or £29 billion, exceeding spending by consumers during any US sales day such as Black Friday or Cyber Monday. Although this event is growing in popularity in the US and the UK, its biggest market is still Asia, and retailers can take advantage of the huge opportunity presented by the event to sell into this market by first optimising their FX needs with a partner such as WorldFirst, offering smooth and straightforward cross-border payments.

Thanksgiving in the US is more important than Christmas for some people, and it’s becoming an increasingly important day here in the UK as well. Turkeys may not vote for Christmas, but a lot will give thanks.

The informal name for the Friday following Thanksgiving, Black Friday has become America’s biggest shopping day, marking the start of the countdown to Christmas. With sales galore, in 2019, shoppers spent a record $7.4 billion and it was the second-largest online shopping day ever. Amazon is one of the biggest and most active marketplaces on Black Friday, responsible for 26% of all online sales on Black Friday in 2018. WorldFirst supports sales on Amazon, as well as helping online sellers achieve better exchange rates and make same-currency supplier payments, enabling retailers to take full advantage of the opportunity to sell into a global marketplace that’s offered by this massive event.

Cyber Monday started as the online alternative to Black Friday, but they’re essentially bookends of a four-day long selling period now, where savvy shoppers can find even more great deals.

It’s the last Saturday before Christmas – AKA the day the men start their Christmas shopping! With panic buying reigning supreme, this is a huge day for American retailers, who typically offer one-day sales – and as what happens in the US generally makes its way to these fair shores, expect more of the same over here!

December 25th is the most important retail date of all – the end date of the Christmas build-up. However, it’s a quiet day retail-wise as most shops are shut, and buyers are otherwise occupied!

The Boxing Day sale is a bittersweet day for most Brits, who’ve spent a fortune on Christmas gifts for their loved ones, only to see them on sale at half the price just a few days later. Shoppers spent more than £4 billion in the 2019 Boxing Day Sale, with some eager bargain hunters waiting outside stores from 4.30 am – however, Black Friday is now the UK’s biggest sale, with poor weather and post-Christmas fatigue blamed for waning Boxing Day sales.