Will trade tensions lead to a currency war?

Since he took the oath of office, Donald Trump has been front page news for a whole host of political and personal reasons. In 2018, however, one things seems to have dominated his thoughts more than any other: the US’s trade relations with the wider world, and in particular China.

A heightening of trade tensions and tit-for-tat sanctions has drawn market focus back on to currencies as a political tool and one that can be used to inflict pain on countries that don’t play by the rules of the new game. 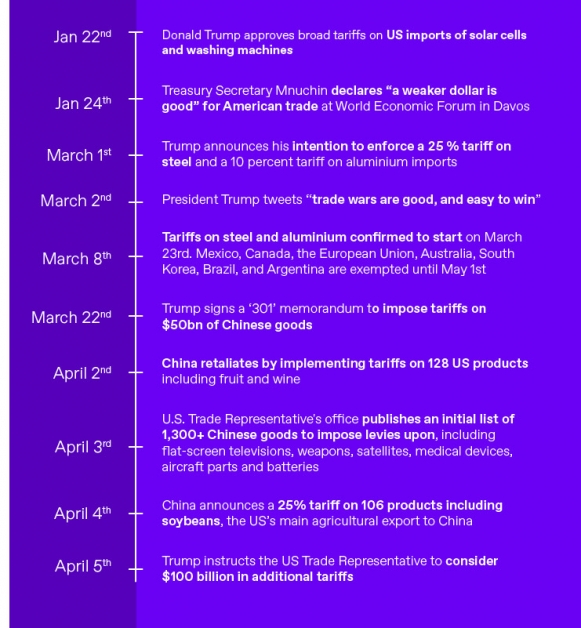 In the eyes of many – myself included – Asia has always been the spiritual home of the currency war. From the devaluations of the Asian Crisis – as South Korea, Thailand and Indonesia flirted with bankruptcy – of the late 90s through Japanese led quantitative easing to drive consumption in the 1990s and 2000s to the constant positioning battles of the People’s Bank of China, hostile currency policy is a hallmark of Asian international markets.

What is a ‘currency war’ anyway?

The term ‘currency war’ is one we deliberately try to avoid because it is mostly an invention of the media, however, the truth is that the act of a nation state devaluing its currency to try and kick-start growth by boosting exports is almost as old as the hills. Interestingly, it’s questionable whether this practice has ever really worked effectively. Before the 19th century, huge amounts of trade between countries were rare and therefore relative exchange rates were not much of an issue. Devaluation did occur but mainly via reducing the amount of gold and silver used within the actual tokens of money in the economy.

Nowadays currency markets are worth over $5 trillion a day and while the vast majority is used for speculation than trade, the duality of the use of currencies means that central banks can manipulate them to punish speculators and trade partners.

Why is President Trump trying to start a trade war?

Trade policy is now almost as important to the US dollar as interest rate policy from the Federal Reserve. Countries that have large trade relations with the US are set to see their currencies remain volatile as a result of concerns over further trade sanctions.

President Trump has long believed that China (amongst others) is manipulating the value of its currency in order to retain an unfair advantage for its exporters. Trump has championed that he will ‘Make America Great Again’ but also make trade fair again and that Americans companies are not able to compete on the global stage due to unfair trade practices.

While China is mooted to have considered weakening its currency to offset the value of any tariffs the larger impact in terms of currency volatility would come from the US denoting China, or another Asian exporter, as a currency manipulator in its semi-annual Treasury reports on the matter. In its October report on the FX policies of the United States’ largest trading partners, the US Treasury included China, Japan, Korea, Germany and Switzerland on its monitor list of countries with “unfair” currency practices. India was also noted whilst Taiwan was removed.

Any currency that is tagged as being manipulated can and likely would have sanctions and tariffs imposed upon it, and these can be done unilaterally by the President without Congressional approval. The next one is due in April.

Much like in an actual war, no one emerges from the conflict unscathed and there will collateral damage on both sides. If the trade war kicks off, it is only a matter of time before currencies are dragged into the mess as well.