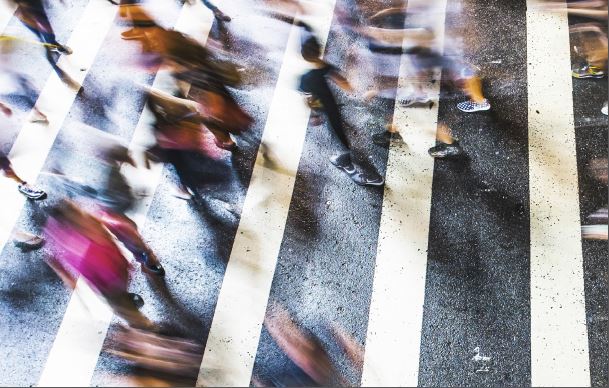 The snap general election called by Theresa May earlier this year put politics centre stage once again. Our last report revealed that UK SMEs were already prepared for an uncertain 2017 and a hung parliament did nothing to calm markets. With worries over inflation, low interest rates, consumer debt and spending all adding to SME woes, our latest Global Trade Barometer shows SMEs are increasingly downbeat about business performance in 2017.

After a cautious start to the year, international business conducted by SMEs picked up in Q2 to £44,000 – the second highest value since we launched the Barometer. 10% up on last quarter and 21% up on a year ago.

Confidence continues to drag on business growth with many reforecasting growth targets down. Less than a fifth of UK SMEs (18%) expect to grow by more than 10%, down from a quarter (27%) last quarter.

WorldFirst transaction data shows that SMEs rushed to protect themselves from movements against the euro and Canadian dollar in Q2 whereas in the most glaring sign that SMEs are turning away from markets further afield, the two markets with the sharpest decline in hedges were Poland and China, both known to be key supply markets for UK SMEs.

Part 1: The state of trade: Where are we now?

Is pickup in international trade brewing?

2017 has witnessed a sharp decline in SMEs trading internationally with the number of SMEs trading in the average month falling by almost half year on year. However, Q2 sees just a 2% increase from the very low volume of trades in Q1. 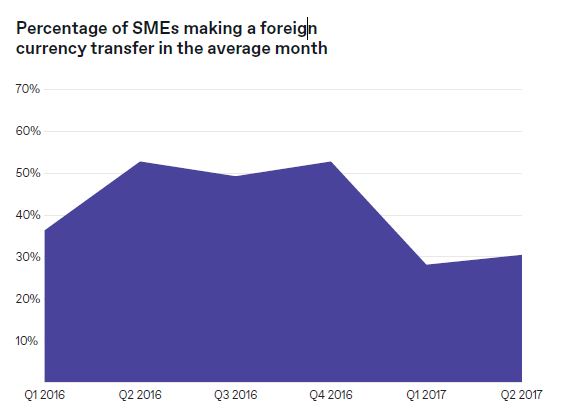 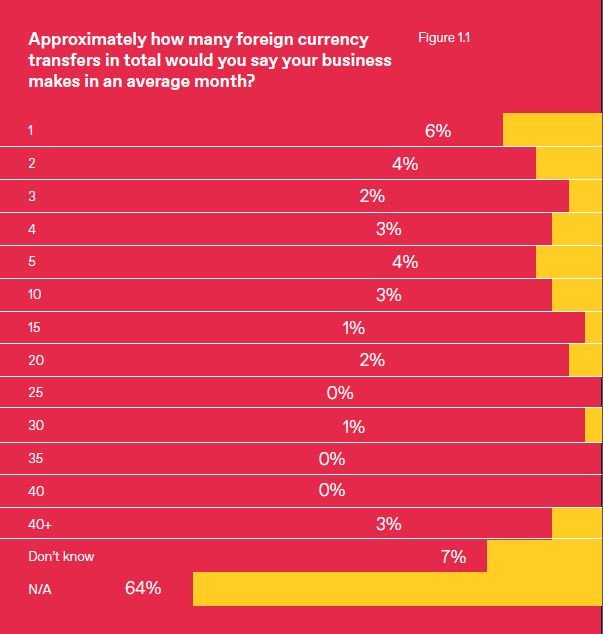 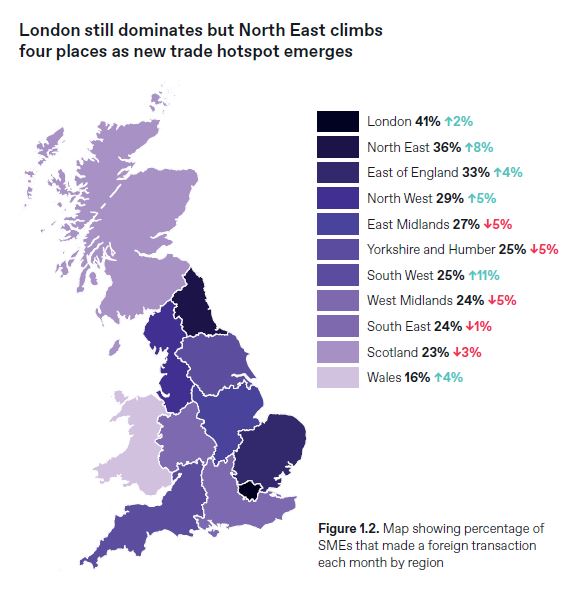 “Whilst the headline figure shows that the average value of global trade for a UK SME has increased by 10% since last quarter, the counterpoint is that the pool of businesses trading overseas is falling. The net result is that against a backdrop of ongoing political uncertainty, businesses appear to be just as hesitant to make foreign exchange transactions in Q2 as they were in Q1. There does seem to be a healthy appetite for global trade but in the current environment it’s no surprise that the majority of UK SMEs are adopting a ‘wait and see’ approach.” 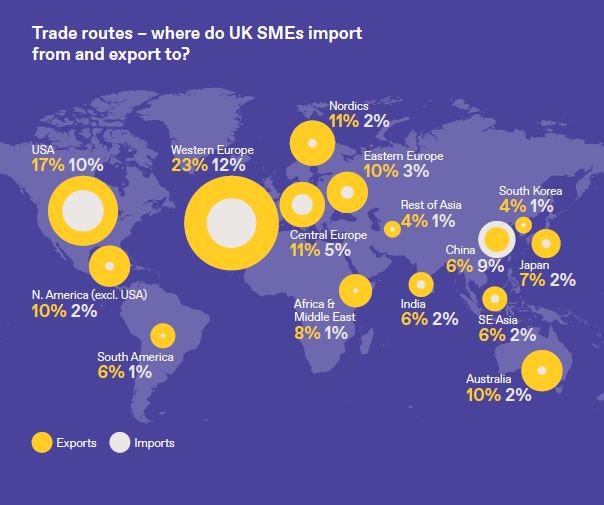 Payment destination data in Q1 showed SMEs moving towards new global trade routes like Chile, Costa Rica and Indonesia, whereas flows d Q2 reveal UK SMEs returning to Europe to do business. The highest increases in payments were seen to Cyprus, Sweden and Croatia, with all three experiencing over 100% increase in inbound transactions. Established trade partners like France and Russia also saw significant increases in payments and transactions.

Emerging markets make the bulk of the countries the biggest slowdown in payments
with Indonesia seeing a 64% decrease in transactions.

SMEs’ confidence continues to dip across the year with 32% of SMEs expecting no business growth, an increase of 1% from Q1. Those expecting less than 5% growth has also grown from 20% to 23%. 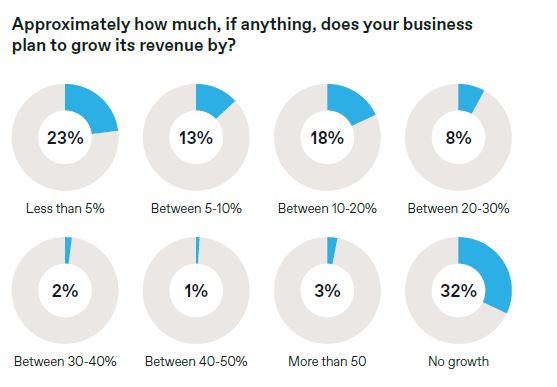 Expectations for global trade, international growth and expansion remain low though with only a third (33%) of SMEs expecting exports to grow in 2017 and 46% expecting no growth or a decline in exports.

This is offset by more positive forecasts for domestic growth. 6 in 10 (61%) are forecasting domestic business growth with over a third (39%) expecting more than 5% growth in 2017. 26% of SMEs don’t expect any international growth this year. 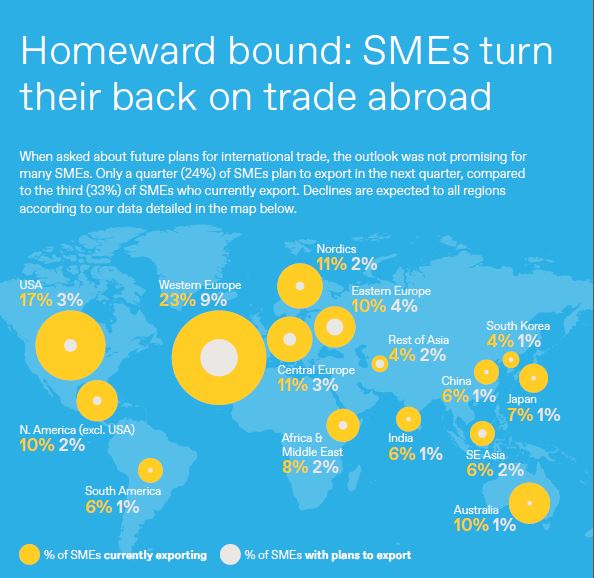 “Our data supports recent assertions by economists that the UK economy is slowing down with less businesses expecting revenue growth over the coming year. Furthermore, with nearly half of all SMEs believing there is no international growth to be had in 2017, the UK government’s ambitions to reduce the trade deficit seem unlikely to be met this year. For those SMEs already trading internationally, emerging markets are out with less trade being done in Asia, Middle East and South America. There has been a slight pickup in trade with Europe nevertheless making it even more vital that we secure an apt trade deal with the EU that suits the interests of the small businesses that keep our economy thriving.”

Q2 was defined by politics. The surprise announcement on the 18th of April of a snap General Election to take place on the 8th June prompted a sharp change in decision-making among the UK’s SME community. 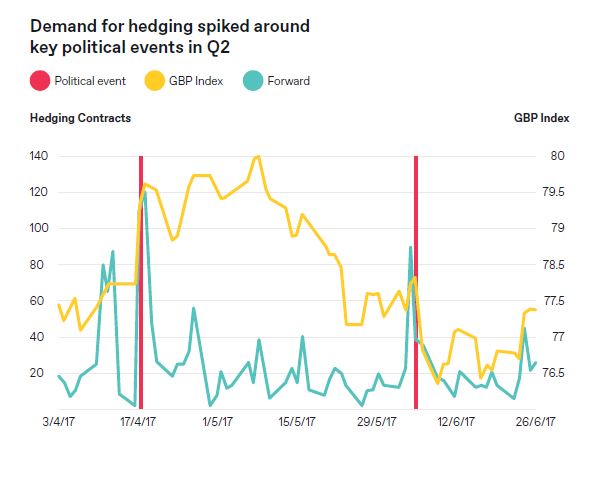 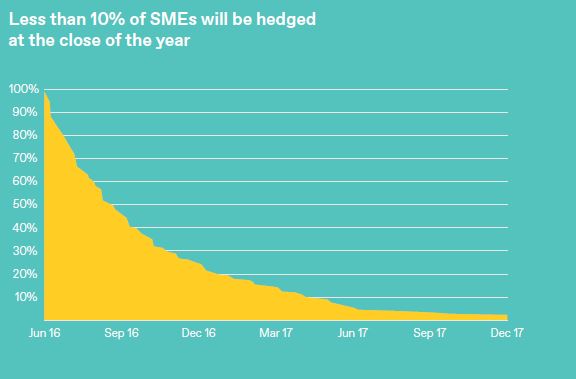 “While the referendum may have been over twelve months ago, it’s clear that SMEs and companies across the UK are still wary of currency markets and the disruption that currency volatility can bring. While SMEs were still happy to hedge their foreign currency exposure, companies are clearly hesitant to commit to longer-term hedging contracts, which may be masking uncertainty over cashflow, sales forecasts, financial commitments or, more simply, could be the result of SMEs expecting currency markets to move in their favour.

While one quarter of data doesn’t make a trend, should this pattern continue, companies large and small will become more exposed to sharp fluctuations in currency markets. With Brexit talks still underway and September’s federal election in Germany, SMEs may find themselves unprotected just when they need it most.”

SMEs fail to protect themselves from further shocks

“The currency markets can be fraught with risk at the best of times and SMEs importing or exporting to other markets are very exposed at the moment given the sort of swings we’ve seen over the last year and a half. As a third of SMEs have already felt the sting of currency movements in the last quarter, it is paramount that business owners get a currency strategy in place that offers them the flexibility to grow their business as we head towards the tail end of 2017.”

With politics heavily impacting SMEs’ trading behaviours, what are the biggest worries UK SMEs face in 2017.
Rise in inflation, fall in consumer spending and currency volatility are the three most pressing issues for SMEs at the moment, with a fifth of SMEs expecting these three issues to negatively impact their business. Less than a quarter (24%) of SMEs believe there will be no external negative impact on their business in the next quarter. 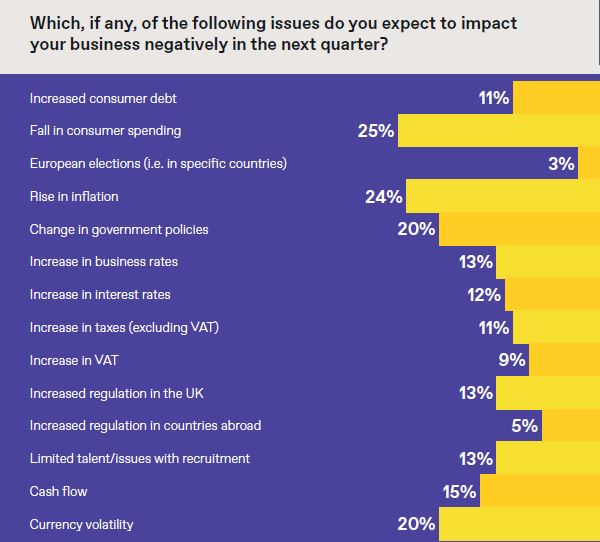 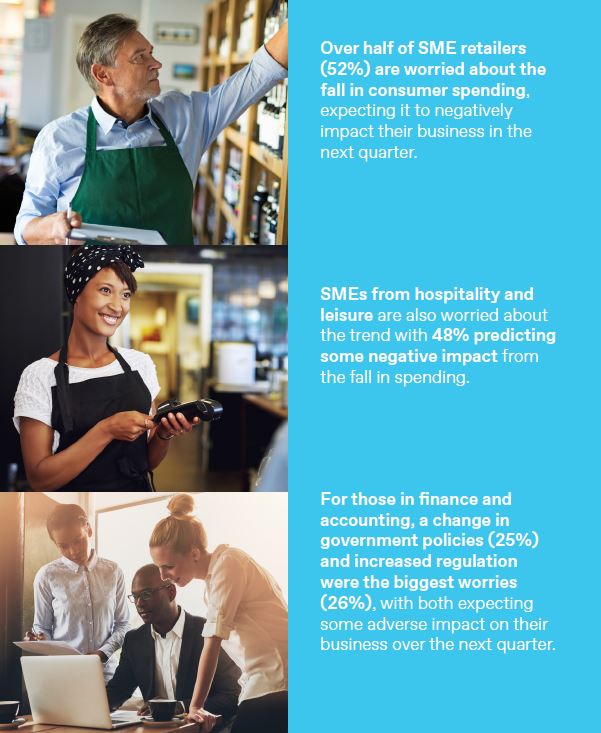 All figures, unless otherwise stated, are from YouGov Plc. Total sample size was 1016 senior decision makers in small/ medium British businesses. Fieldwork was undertaken between the 3rd- 11th of July 2017. The survey was carried out online. The figures have been weighted and are representative of all British business sizes.
WorldFirst data on client contracts was collated between 1st April 2017 and 31st June 2017 and refers to UK corporate desk clients only.