One month to go

With a little less than four weeks to go until the end of the Article 50 process, the UK remains on course to leave the European Union without a deal. The past few days has seen some light shine through the cracks, with a path away from the March 29th cliff edge laid out as an option by the Prime Minister. Sterling rallied initially but has tired as the week comes to an end. So, what now?

Prime Minister May set out the new Brexit sequencing in front of MPs on Tuesday. Firstly, we will have a vote on her deal on Tuesday 12th, if that is defeated as it likely will be, then there will be a vote on eliminating the no-deal option on Wednesday 13th and a vote on a ‘short delay’ on Thursday 14th. 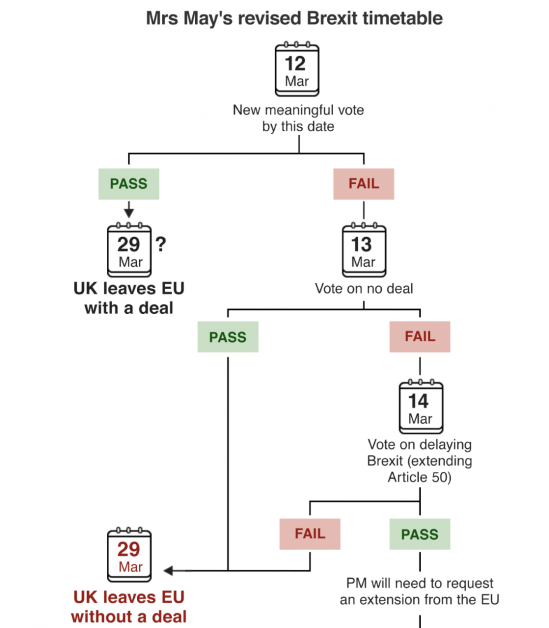 A delay, as the Prime Minister has been at pains to emphasise, doesn’t negate the chance of the UK leaving the EU without a no-deal but instead changes the date by which a deal needs to be sought. Current estimates on how long any delay could vary from as little as 60 days to two years.

What does the market reaction tell us?

Most of the sterling’s rally came from the news that there could be a route to avoid a no-deal Brexit. But to propel it much higher than the 1.33 and 1.17 levels against the USD and the EUR respectively, further good news needs to be forthcoming.

For now, markets seem happy to bet on hope. There is an argument that market expectation has always been overly optimistic about the chances of a Brexit deal and we think that is unlikely to falter with a month to go. Sterling’s ability to hold onto these gains will depend on three things as we move towards the votes.

1. How the European Research Group positions itself

The European Research Group (ERG) are the fountainheads of the Brexit movement within the Conservative party and have been unhappy with Theresa May’s plan for Brexit since she brought it back to Westminster from Brussels. They gleefully helped defeat the government’s plan in January at the bill’s first meaningful vote, but now time is running out. While Remain voters may not be getting what they want, the question remains whether hard Brexiteers, such as those in the ERG, will be prepared to compromise on at least some form of Brexit.

Voting for Theresa May’s deal eliminates the chances of the ERG’s worst nightmare – a no-Brexit. Signs that politicians are starting to coalesce behind the Prime Minister’s deal would be positive for the pound.

The EU has been the model of consistency throughout the negotiations. Objections to the path of the negotiations have been dealt with and Michel Barnier speaks for the entire bloc within the Union. With these negotiations come down to such a critical point we have to wonder whether those members of the EU who are more intrinsically linked to the UK via trade or politics – Ireland, Germany, France, the Netherlands – dominate the news more than those who are not, creating a divide within the Union.

All union members have reiterated that the withdrawal agreement is not for renegotiation so, for now, the alliance remains together. Should the EU start to show inconsistency, then we would view that as a broad sterling negative on the basis that it makes a no-deal scenario more likely.

3. The length of any extension that may be negotiated

As we noted above, thoughts on how long an extension to the Article 50 process could differ from 60 days to two years. A short extension has widely been priced into the pound ever since the government’s first defeat in the House of Commons on its Withdrawal Agreement plans. it can be argued that a longer extension is not necessarily a good thing as more time without an agreement will harden the polarisation between the Leave and Remain voters, and could lead to a general election or a second referendum as the only ways to clear the air.

A long extension also works in the Prime Minister’s favour by giving her another carrot to dangle in front of Brexiteer MPs to entice them into voting for her deal.

On balance, we see a longer extension as good news for sterling although would likely caution against it prompting a slew of new investment into the UK economy akin to what would likely happen in the event of a deal.

Our expectations for sterling

Our outlook for sterling against the USD over the coming weeks is as such:

Beware the Ides of March

In conclusion, the last 23 months of negotiations have boiled down to the next few weeks. Sterling holders of buyers need to be ready for the volatility that ‘Hell Week’ will throw at them; there is almost certainly one more twist left in the tail. On the balance of probabilities, sterling is more likely to rise in March then fall but unless you have hedged this sterling increase, you cannot count on it lasting.

To speak to a member of the WorldFirst team about what the next four weeks may mean for you and your business, click here or email corporate@worldfirst.com.