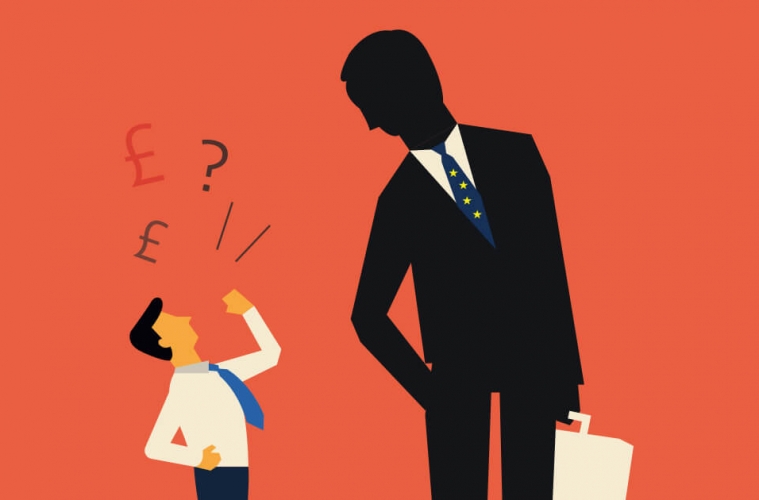 Article 50 and Brexit: what it means for SMEs

Owen Lock and Mark Abrams of Trade Finance Global explore the impacts of Article 50 and Brexit on UK SMEs.

The UK has had a turbulent year; having voted to leave the EU and seeing much political unrest with the Prime Minister resigning. The process has been anything but straightforward, as a formal exit did not start until Theresa May triggered Article 50. This means that the two-years provided for negotiations has now commenced.

Due to the time it will take to exit the EU, there should not be any short shocks. However, a big fear is that of trade and how companies in the UK will be treated. We see that many SME’s will actually hedge out the risk of the uncertain environment. Offices may be set up in the EU, but this will all become clearer as negotiations progress. It is important to understand how the land lies with the euro, which is feeling this strain already.

Uncertainty for the euro

The level of uncertainty within the Euro-zone this year means that predicting the medium term path of the euro with any certainty is an almost impossible task. Many are thus limiting their exposure to euro currency risk and the uncertainty of Brexit is only one small factor. SMEs need to understand the wider geographical landscape when deciding on what may happen and where to limit exposure.

In terms of potential severity, the greatest risk to the value of the euro is the threat of a banking crisis in Europe. The total stock of non-performing loans (NPLs) in Europe currently stands at around €1 trillion, and with the strong links between sovereign debtors and national banking systems, a collapse could cause a sovereign debt crisis in affected countries.

The greatest risk in this regard comes fromItaly and Greece, where 16.6% and 46.6% of all debt is categorised as non-performing. The Banca Monte dei Paschi (MPS) in Italy was recently calculated as having a mammoth $29.6 billion in NPLs on their balance sheet, and whilst the Italian government put together a €20 billion rescue package in the final month of 2016, Goldman Sachs have estimated that it will take €38 billion for the bank to adequately recapitalise. If MPS were to collapse, there would be huge ramifications for the value of Italian assets, including the euro. The threat from financial institutions to the euro is not limited here – Greece looks likely to struggle to meet €7.4 billion in debt payments due in July, whilst a number of big banks across Europe have fallen on hard times in recent months.

Whilst clearly a banking crisis would be a disaster for the euro, the mere existence of downside risk in the financial system may be enough to put downward pressure on the currency, deterring risk-averse investors from taking up debt or equity positions on the continent.

Whilst there remains a substantial amount of political risk currently priced into the value of the euro, the early signs are that the threat of populism on the continent may be overstated. Expectations of a strong performance in Holland from Geert Wilders’ far right Party for Freedom (PVV) proved to be baseless, whilst Angela Merkel is expected to comfortably win Germany’s general election later this year – a result that would represent stability for the euro. An antagonistic Brexit deal would act to put downward pressure on the euro, although the reality is that such an arrangement is in neither the EUs’ nor Britain’s interest, and is unlikely to materialise. 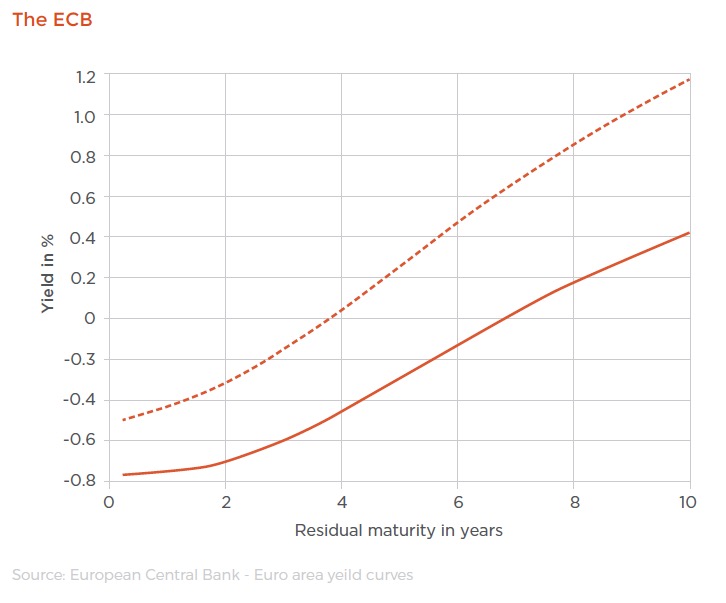 The continued pursuit of low interest rates as part of an aggressive monetary strategy by the ECB should continue to have a depressing influence on the euro. The base rate currently sits at 0%, and president of the ECB recently indicated that this pursuit of growth-conducive monetary policy will continue until at least the end of this year. The base rate affects the euro through its role in guiding the price of sovereign debt and a range of financial derivatives in Europe, which subsequently are less attractive to investors. The yield curve for the EU area AAA rated bonds is given by the solid line in the diagram above, and whilst showing future inflationary expectations in the medium term, is relatively flat over the next two years – reflecting the uncertainty and low base rate in the region. The ECB also plans to continue its two year quantitative easing programme until the end of this year. The intention of this is to increase confidence, investment and subsequently moderate inflation in the region, which would have a positive effect on the value of the euro. However, as the length of the intended QE programme indicates, the benefits of this are unlikely to be felt before next year at the earliest.

One money one dollar

The strength of the US economy, and anticipated further rate hikes by the FED are likely to see the euro devalue relative to the dollar. One of the biggest fears is the abandonment of the TTIP– the trade deal between Europe and the USA. Such an action would harm demand for European exports, putting downward pressure on the euro. Trump also has outlined plans to introduce a homeland investment act, with the intention of increasing domestic investment in US companies (and subsequently less abroad). If such a bill were to make it through the senate, clearly this would be bad news for Europe.

The FED has recently increased the base rate to 1%, raising the attractiveness of US bonds, whilst anticipated expansionary fiscal policy under Trump is likely to be positive news for US equity markets. Both these factors make a devaluation of the euro relative to the dollar likely, particularly if new investors in US equities raise capital by selling positions they hold in the EU.

The ECB also plans to continue its two year quantitative easing programme until the end of this year. The intention of this is to increase confidence, investment and subsequently moderate inflation in the region, which would have a positive effect on the value of the euro. However, as the length of the intended QE programme indicates, the benefits of this are unlikely to be felt before next year at the earliest.

With so much uncertainty in the EU at the moment, Trade Finance Global see the most sensible strategy for UK businesses is to hedge exposure to foreign exchange risk in Europe and see what the outcome of negotiations will be. Having said that, the region still offers a number of positive investment opportunities, and has two multi-billion dollar rescue mechanisms in the event of a crisis. Trade Finance Global offer a number of solutions to companies, assisting with enhancing international trade to or from the EU.