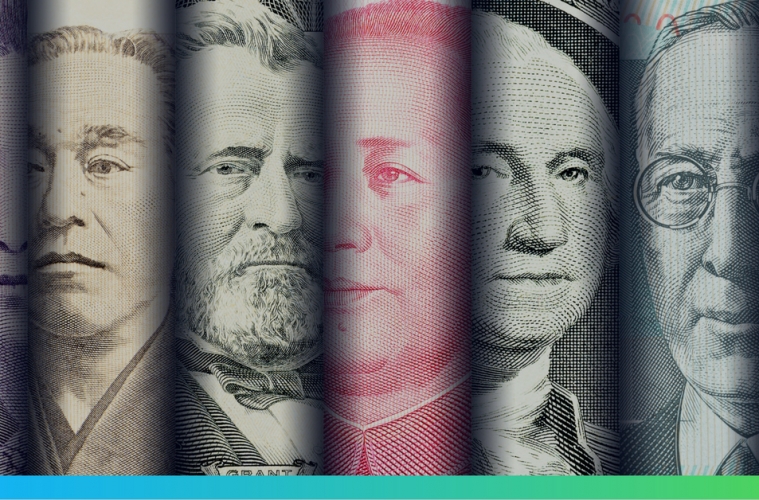 The Rise and Fall of Currency

Many people only think about exchange rates when they go on holiday, but in reality the daily movements of the world’s currencies can impact all aspects of life: from prices in your local supermarket to the price of homes in your city. In an increasingly globalised world, the butterfly effect of a strong currency in one country can lead to factories closing down in another – or alternatively, allow other countries to avoid recessions.

Exchange rates are complex, however major geo-political events, industrial booms and busts, and economic interventions can set them on long-term trends – and this is what we set out to illustrate with our latest online tool, The Rise and Fall of Currency.

Using exchange rate data from the Reserve Bank of Australia,  we compiled a timeline showing the AUD’s fortunes against six major currencies since 2000, and the events that shaped their rise and fall.

The exchange rate between two currencies are dictated by a lot of complicated factors – so complicated that even trained economists often struggle to make sense of them! But the most important are the interest rates and levels of inflation in their respective economies.

Consistently low inflation generally means that a country can buy more from its trading partners with less money. A country’s debt rating is also important: the less debt, the more attractive a country is to foreign investment.

However, world events can always throw a spanner in the works – as you can clearly see from the notable dip in nearly every currency in 2008, when the global financial crisis was in full swing. Less well-publicised factors, like the 2000s commodities boom, can have a considerable impact too.

Australia was largely insulated from the worst effects of the crisis, thanks to decades of consistently low inflation, low interest rates and relatively low levels of debt. As a leading producer of raw materials like iron and coal, it was also particularly well-placed to take advantage of the commodities boom – as can be seen from the AUD’s strong performance against the Japanese yen, US dollar and Chinese yuan during these years.

Finally, interventions from a state’s government or treasury can have a big effect on exchange rates. For example, the Chinese yuan was kept pegged to the US dollar until mid-2005, which is why the two currencies followed the exact same trajectory until the peg was lifted, with dramatic results.

We hope you find it interesting to explore the rise and fall of currencies with our tool – and that it helps you to make a bit more sense of the many different factors that affect the highs and lows of currency!

LEARN MORE ABOUT THE RISE AND FALL OF CURRENCY HERE.

Jeremy Cook, World First’s Chief Economist, has written a Whitepaper which outlines how events such as the French Presidential Election, German Chancellor Election, the triggering of Article 50 and Trump’s presidency could affect currency markets this year.

‘Let them eat Chaos’ is a must-read for anybody seeking to know more about how the geo-political factors of 2017 will affect key currencies in the world.