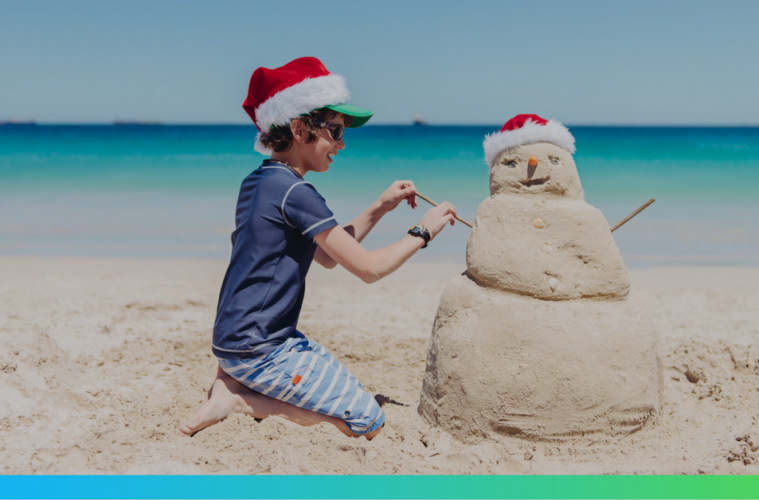 For people that originate from the Northern Hemisphere, the holiday season is all about cosiness, getting rugged up and large hot meals that warm up the house. For those that might come from Asia, the holiday season may not be something that is widely celebrated due to different religious or cultural calendars so the holiday cheer and festivities at this time of the year might come as a surprise.

We recently surveyed over 2,000 expats living in Australia revealed the Christmas traditions and customs in Australia that they found more than a little peculiar and hard to get their head around.

Instead of frozen toes and woollen sweaters, expats coming from above the equator arrive to experience Christmas with sunshine, short sleeves and the great outdoors.
81% of expats we surveyed said that having Christmas in the summer time is something they found difficult to get over or are still trying to get used to with most stating that the key indicators of what Christmas feels like are so topsy turvy that they feel there is a lack of Christmas vibe.

If you’re an expat don’t be surprised if you receive an invitation to hit your local sandy shores or to come away to a beach shack with instructions to bring sunscreen, some cold ones (beers), a hat and a plate (we’ll get to that a bit later).

Hitting the beach is a beloved Christmas tradition as Aussies seek respite from the sweltering heat and make the most of their time off by relaxing near the coast.

While the traditional English Christmas meal of a glazed ham or turkey still makes an appearance on dining tables around Australia, it’s highly likely that it will appear alongside a pinchy crustacean or platters of shellfish and perhaps some freshly grilled lamb chops with soft white bread and tomato sauce (called ketchup in the US, Australians also colloquially refer to it as Tommy Sauce, Sauce, T-Sauce or Dead Horse).

Australians like diversity at their Christmas meals and due to the warm (and sometimes intense) weather, a bevvy of roasted meats and vegetables feel unseasonal and can overwhelm the stomach. This  is where cold prawns, crayfish and oysters come in, as well as loads of crisp salads.

While it might seem strange for some (one of our respondents even went as far to say that “Cold Christmas food should be a crime”), fresh seafood and a barbecue are something that Australians generally love and embrace at this time of the year.

….And mangoes, apricots and other stone fruit.
The Aussie summer in December means that the orchards flourish and stores and markets are filled to the brim with sweet and fresh stone fruit which inevitably end up in the fruit bowl and served fresh in desserts (like pavlova) on Christmas day and throughout the summer period.

5.Bringing along your own meat/alcohol/share plate to a party

For Australians, the invitation to “bring a plate” means to bring a plate with food, not just an empty plate!

It might seem ironic if you’re trying to be hospitable and throw a party but it is perfectly acceptable to host a party or gathering without supplying all the food and drink in a similar way Americans organise potluck dinner parties where guests share a communal meal.

Aussies love a get together and opening their homes up to others – “Bringing a plate” simplifies the meal planning, opens up conversations about recipes, culinary techniques and traditions (since Australians come from everywhere around the world) and shares the responsibility of catering usually leaving the host to be able to spend more time… well…hosting, and entertaining the guests.

6. Abbreviating every word – even “Christmas”

Something an Aussie would say: “Can you head down to the bottle-o down the road this arvo to grab a few bevvies before Chrissy dinner? You can grab a prezzy for Tommo while you’re there. Oh, and can you  fill up the car at the servo too?”

Translation: “Would you mind making a trip to the bottle shop down the road later this afternoon to purchase some beverages before Christmas dinner?  You can pick up a present for Tom while you are there. While you are out, would you mind also filling up the car (with petrol) at the service station too?”

Why do Australians abbreviate everything?

Dunno. We just do.

If it’s so hot, why do Australians get around with bare feet when they’re not at the beach?
As we said above, being relaxed is a well known Aussie trait and that extends to footwear as well.

While lots of public areas (pubs, shopping centres) require you to wear footwear for your own safety, some Australians generally take this as a guideline rather than a hard and fast rule.

If looking for their thongs (flip-flop sandals) is all a bit too hard, going barefoot is the next best option.

The 2,000+ expats that responded to our survey also told us that sending money to family and friends was the number purpose of their international money transfers and traveling back home was number three on the list during the December/January holiday season.

If you need to send money back home, speak to a World First Currency Specialist that can assist you through the transfer process and offer competitive exchange rates so you can make the most of your funds.

Speak with a World First currency specialist on 1800 744 777 or visit us at worldfirst.com.au

These comments are the views and opinions of the author and should not be construed as advice. You should act using your own information and judgement. Whilst information has been obtained from and is based upon multiple sources the author believes to be reliable, we do not guarantee its accuracy and it may be incomplete or condensed.

We have no commercial affiliation or commercial interest regarding the businesses mentioned in this article. The information is only provided as gathered and should be verified before, using your own judgement.