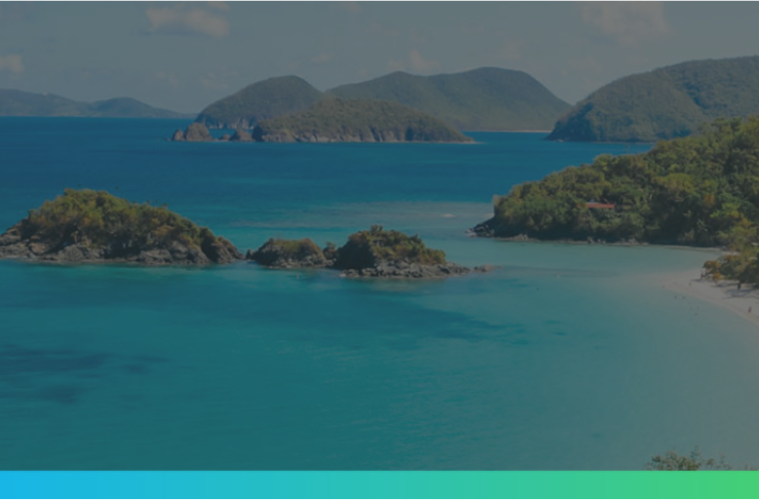 Yesterday, the Reserve Bank of Australia released the minutes from its March monetary policy meeting. The minutes revealed little new information, however, the language of the forward guidance suggested a strengthening of the preference to hold rates steady, “The cash rate could remain at its current level for some time if the economy was to evolve broadly as expected.” Previously, the board declared to an unspecified period of stable rates whereas it now believes that it could be ‘some time’; read as a ‘longer time’. The market reacted to this positively with the AUD rallying through the European and North American sessions.

Their comments on employment were not based on the most recent numbers, however, the board noted low levels of wage growth. This is predicted to keep inflation contained even as the lower exchange rate increases price of imported goods.

They were also optimistic on China despite growing concerns expressed by numerous commentators. They commented that while mining investment is due to decline, the raw material exports that it has facilitated will remain resilient in the long term, “The Board was briefed about longer-run trends, which suggested that, while the working-age population was close to peaking, urbanisation was expected to continue in China for some time. Combined with likely increases in the size and quality of housing, this could underpin high levels of new urban residential construction over coming years.”

Overall the minutes seemed to solidify the intent not to cut rates further and that the easing cycle was having its desired effects. As such, market analysts have revised their forecasts for no further rate cuts; Westpac being the latest. Only six of thirty-two firms surveyed by Bloomberg are forecasting a further cut in 2014; including JP Morgan and Goldman Sachs.

Australian employment data smashed expectations this morning with 47,300 jobs added in February. It was the strongest figure since 2012 and full-time employment growth posted the largest monthly increase since records began. The unemployment rate was steady at 6.0%. The AUD climbed about half a US cent throughout the morning and then another half on release; losses from the weekend’s disappointing Chinese trade balance were recouped. 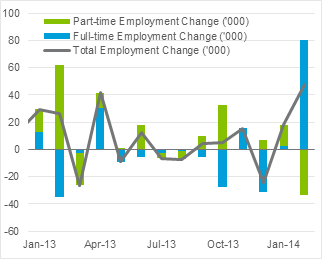 Buyers beware, there is some important fine print that can be overlooked in this release. The bureau declare in the release that sample changes have skewed employment growth numbers. Regarding the change of sample they state, “This incoming rotation group contributed, in original terms, 37% of the increase in total employment and 29% of the decrease in persons not in the labour force in February 2014. The trend estimates provide a better measure of the underlying level and direction of the series especially when there are significant rotation group effects.”  This means February’s numbers, whilst still positive, are somewhat overstated. 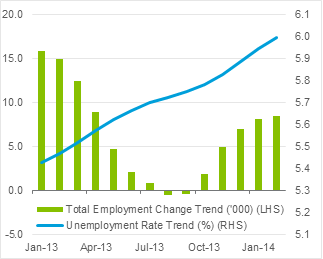 As per their recommendation we should look to the trend estimates for a more accurate view. The trend shows employment growth slowing with unemployment steadily increasing; currently at 6.0%. The RBA predict unemployment will continue climbing until early 2015, where revived economic growth will reverse the trend. The participation rate, the percentage of the population either working or looking for work, has stabilised at 64.7%. According to the RBA, about half the participation rate decline in the last couple of years was due to demographic changes as baby-boom generation workers moved into retirement.

This month’s employment numbers are positive, however, should not be taken at face value. The labour market remains relatively weak although not weak enough to prompt a serious change of policy from the RBA. The RBA’s forecasts predict the continued increase in the number of unemployed throughout 2014 before non-mining sector economic growth picks up the slack. The latest AUD confidence is only as good as the next shaky Chinese data release. The EU and U.S. imposed diplomatic sanctions on Russian and Crimean officials this week in response to their attempts to secede from Ukraine and re-join Russia. The EU listed twenty-one officials while the U.S. listed eleven; including three of Vladimir Putin senior advisors. The Crimean referendum to secede was farcically voted ‘yes’ by 95.5% of participants and not recognised internationally with most opponents boycotting the vote. Commentators point out, however, that if conducted legitimately the notion probably would be still successful.

Rest of the World

The U.S. Federal Open Market Committee will meet tonight for its March monetary policy meeting. The course of quantitative easing tapering is widely viewed as being set at a $10 billion reduction each month until the end of the year. Markets will, as always, look to the committee’s assessment of the economy for hints on future policy.

Last Thursday, the Reserve Bank of New Zealand decided to raise its benchmark interest rate by 0.25% to 2.75%. The move sought to get ahead of inflation which is currently at 1.6%, below the 2.0% target. New Zealand will release its GDP growth figure for the fourth quarter of 2013. Expectations are for 1.0% quarterly growth.

Chinese industrial production grew by 8.5% per annum in February, slightly lower than the 9.5% expected.