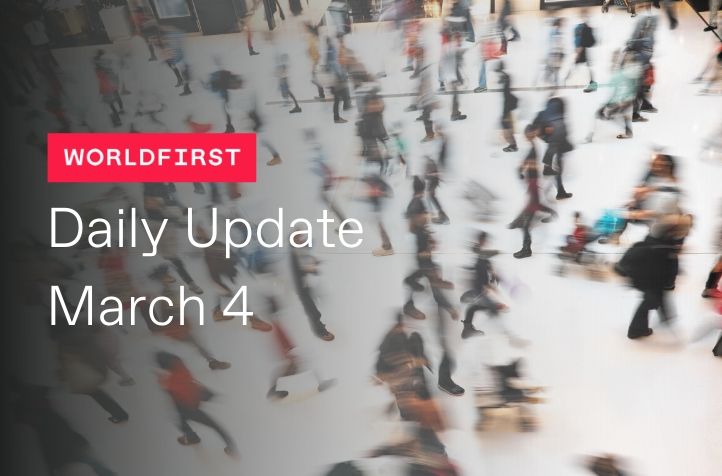 The UK released its construction PMI for February last night where it substantially beat expectations coming in at 52.6 against expectations of 48.8. As a result, the GBP retraced some of the losses it suffered yesterday and is now at 0.5146 (1.9433) against the AUD. Today the Composite and Services PMI’s for February are released. Both are expected to remain stable, due to come in at 53.3 similar to what was seen in January. With a number above 50 indicating growth, this has the potential to further help the GBP and will be interesting to watch.

It was a big day for the AUD yesterday as it felt the impacts of both the RBA and FOMC cutting interest rates. Initially, the market was cautious about how the RBA would act and when it was discovered that they cut interest rates to 0.5% from 0.75%, the AUD appreciated in value. This was not the expectation as prior Building Approvals data was poor, the accompanying RBA statement remained negative but the pro-active nature of the rate cut might have spurred on the market positivity. This growth continued as the FOMC cut interest rates 50 basis points and the AUDUSD traded above 0.66 again. Today, GDP is released at 11:30 AEDT with a slowdown expected for Q4.

The Fed has held its first emergency meeting since the GFC and concluded with the decision to cut interest rates by 50 basis points from 1.75% to 1.25%. Chairman Powell stated that the fundamentals of the US economy remain strong but the risks of the coronavirus to economic activity were growing. The cuts aim to help maximise employment and stabilise pricing. On the back of this, the AUDUSD traded higher moving to 0.6645 from the daily lows of 0.65097. The USD was also down against all other majors which is as expected after a double rate cut. Tonight, ISM Non-Manufacturing data becomes available.

Last night we saw positive data out of Europe where inflation data beat expectations as Core CPI YoY improved by 0.1% and CPI MoM by 1.2% for February. This halted and brought back in some of the gains the AUD had made earlier in the day now trading at 0.5898 (1.6949). Today, German Retail Sales for January are due where a 1% increase is expected shortly followed by services PMI’s out of France, Germany and the EU. As it stands, all PMI’s are currently forecast to remain stable compared to last month and above the 50-mark indicating growth. The evening will then come to an end with retail sales out of Europe for January where an uptick is expected from December coming from -1.6% to 0.6%. Should the data come out as forecast there is potential for the EUR to strengthen against the AUD.

All rates shown are indicative market rates and should not be used for trading purposes. Prices correct as of 4/03/2020 9:20 (AEDT)