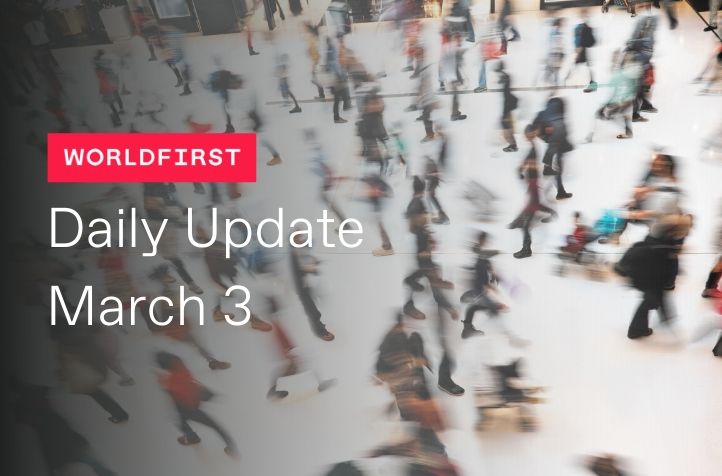 Overnight in the UK, we saw the Pound weaken further against the major currencies particularly the Euro and the USD, falling 1.38% and 0.44% respectively. This is likely on the back of EUR ‘strength’ (see Europe below) and global uncertainty. The only piece of data that was released overnight was Manufacturing PMI figures which experienced growth on the previous month of 50 but slightly missed expectation coming in at 51.7. Tonight, construction PMI takes the floor with the figure expected to remain in contraction but grow to 48.8.

It is a big day for Australia and the Aussie Dollar with the March RBA meeting. The market is expecting an interest rate cut but the question will be whether a double-cut will be enacted. How the market reacts to the decision today made at 14:30 will be important in understanding the future direction of the AUD. Also out today, Building Approvals for January and the Q4 Current Account. All eyes on the RBA.

The US manufacturing sector took centre stage overnight as ISM employment figures and PMI data were released. ISM Manufacturing PMI depreciated but remained in growth territory at 50.1 whilst the employment data improved to 46.9 but remains in contraction. This left the USD slightly up against the AUD and JPY but down against a strong Euro. Tonight, there is no high impact economic data out of the US.

The Euro continues to surge, up further against all the major currencies. Unwinding of carry trades (borrowing in a low interest rate currency/investing in a higher yielding currency) have been part of the reason for the recent appreciation of the Euro, currently trading at 1.7054 against the AUD and 1.1131 against the USD. Overnight, German, French and Eurozone Manufacturing PMI’s all improved across the board which helped stabilise the Euro in its strong position. Tonight, Eurozone inflation and unemployment becomes available with inflation expecting a slight depreciation and unemployment to remain at 7.4%.